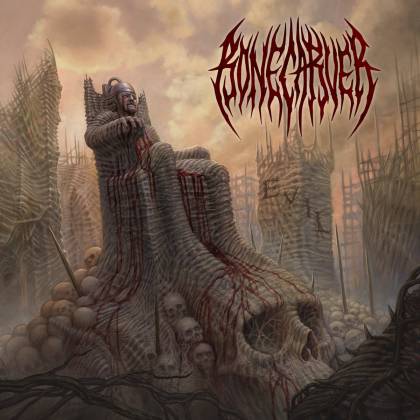 Petulant religious folk aside, most of us enjoy a bit of flagrant blasphemy woven into the fabric of our heavy music. What we generally don't expect is to find the stench of malevolence and infernal intent emanating from a band with strong roots in the deathcore scene. BONECARVER were previously known as CANNIBAL GRANDPA, and were well-established as Spain's premiere purveyors of lobotomized breakdowns and pig squeals. What the band are peddling on "Evil" is something else entirely, and it's so twisted and unsavory that you can almost feel Satan's breath on the back of your neck (if Satan was an actual thing, of course) as the riffs erupt.

This is a wholesale reset for this band. Forget the past, "Evil" says very forcefully, and embrace the disgusting, bone-shattering reality of the here and now. With every hackneyed deathcore trope stripped away, and a laudable quantity of much more extreme elements thrown in, BONECARVER are reborn here as aspiring masters of ultra-modern brutality. There are still plenty of swivel-eyed, 'core-friendly slam moments to be enjoyed, but songs like the multi-tempo "Overtorture" and the genuinely berserk "Moon Maniac" demonstrate a much more sophisticated array of inspirations, with everything from melodic black metal to ultra-demented guttural death-grind being hurled enthusiastically into the Spaniards' hissing cauldron. And once again, this is an album that somehow lives up to its title, with an omnipresent sense of nauseating tension and waves of nihilistic spite conspiring to lift even the most thuggish moments high above the ordinary.

Lyrically, "Evil" continues BONECARVER's oft-stated obsession with serial killers, and the gruesome endeavors of Albert Fish in particular. This is fairly standard conceptual fare in extreme metal, but there's something about the sheer ferocity of BONECARVER's attack that makes their thematic preoccupations far more convincing than most. Echoing the unstoppable nature of a deranged killer's urges, the violent battery that drives the likes of "Nest of Traitors" and "The Blacksmith's Massacre" seems to suggest that the musicians responsible may be a little bit psychotic themselves. The bloody, two-minute ambush of "Hound Pound" will certainly take some beating in 2021 for sheer, mad-as-fuck intensity.

The final proof of BONECARVER's evolution from deathcore diehards to murderous maverick, is the closing title track, which is simply magnificent: a master class in grandiloquent, despicable death metal, oozing imperious disdain and smashed out with maximum force. It's the sound of a good band becoming great, as they harness the power of the dark and bring death's hammer crashing down.