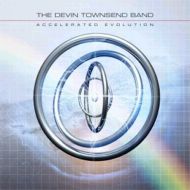 Devin Townsend and "writer's block" are two things that have about as much chance as coming together in this lifetime as George Bush hugging a tree. In his world, if he's not working on or releasing an album, then he probably pops a thermometer in his mouth to check if he's coming down with something.

Consequently, in some quarters it's has become easy to label the grimacing Canuck a crackpot, unable to do much else except churn out music as a mere statement of his shifting personality. At the end of the day, though, you cannot argue with the consistent quality of his output. For every so-so ZIMMER'S HOLE album (arguably the weakest of his projects),there is at least a raucous, riff-slinging one from his main squeeze STRAPPING YOUNG LAD, and to offset that, a more introspective work under his own name — which brings us neatly around to "Accelerated Evolution".

Having done extreme metal, heavy metal thunder and all that jazz, it might come to something of a shock to some Devin devotees that "Accelerated Evolution" veers precariously close to pop-punk ever so occasionally. It's not something that dominates the proceedings, and maybe it wasn't meant to be intentional, but album closer "Slow Me Down" especially is just throwaway fluff and doesn't exactly stretch the talents of the man.

Apart from other minimal lapses in focus, "Accelerated Evolution" rolls along quite nicely. It isn't as ambient and spacey as previous Devin solo outing "Terria", but the results are equally as stirring. If you had to bash your brains in for a definition, then it would be simple and adequate enough to label this a modern melodic rock album. "Random Analysis" possesses a knockout, stripped-down melody, while "Sunday Afternoon" brings SOUNDGARDEN to mind in one of their particularly emotional states. Never one to turn his back on tradition, Devin has also found time for a neat instrumental, "Away" which centers on some stirring harmonic guitar lead work.

While you may have to wait just another two weeks for a Devin-related album, "Accelerated Evolution" will hook itself into your psyche for a lot longer.