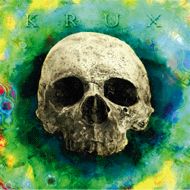 The memories of a rotund Swede charging around stages in a monk's cassock will forever go down as one of the most enduring and amusing images in metal. Indeed, it's fair to say that exuberant frontman Messiah Marcolin was significantly instrumental in attaining legendary status for doom overlords CANDLEMASS back in the eighties. Oft overlooked, however, was Leif Edling: considered bass plucker, purveyor of immovable mullet hairdo and, most importantly, the brains behind much of CANDLEMASS' epic songsmithery.

To arrive at the conclusion that Edling was able to concoct an interesting musical brew (ABSTRAKT ALGEBRA) after CANDLEMASS fell apart isn't too difficult (note: the latter have since reformed). To try and make sense of the dour lumpen dirge being played out through his latest project KRUX, on the other hand, is almost agonizing — especially when pre-listening expectations were so understandably high.

To assist him in this latest venture, Edling knocked on the doors of bassist Jörgen Sandström and drummer Peter Stjärnvind, both of ENTOMBED. This dependable duo wouldn't ordinarily present any problems, except for the fact that whilst Stjärnvind takes up his regular position at the stool (granted, he rocks here),Sandström has opted for six strings as opposed to four. Big mistake number one.

The press release kind of gives the game away in professing that he hadn't so much as touched a guitar in years. And boy, does it show. The vibe is very much ultra-grinding SABBATH, with flourishes of space rock a la Hammond, Moog and mellotron. But Sandström's delivery, along with the generic whiff of the riffs themselves on the title track or "Nimis", to name but two, just makes the combined elements appear flat and insipid.

And so onto big mistake number two: Mats Levén. Not exactly the greatest singer to have exited the YNGWIE MALMSTEEN fold, his performance as vocalist elect is weedy, when it should be enigmatic and strong delivering such lines as "You told the truth I'll be dead forever, You said there's no love in my world" (from "The Black Room"). When his naked voice is exposed at some of the more spacious junctures, the outcome is more disappointing still.

To say that this is the first truly underwhelming album Edling has been responsible for isn't such a bad statistic. That said, you'll never yearn so much for a fat man in a robe ever again…