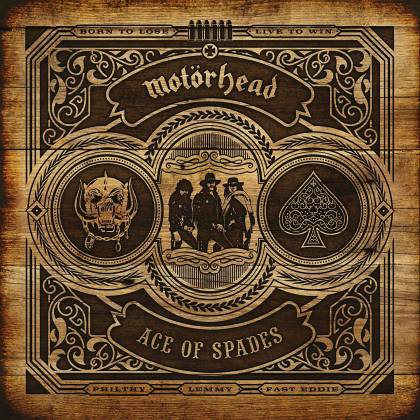 The MOTÖRHEAD camp first opened the doors to the band's archives in a spectacular way with the "1979" deluxe box set. The collection celebrated the 40th anniversary of the release of the seminal classics, "Overkill" and "Bomber", but the real meat of the package that justified double-dipping on those albums one more time was a deep dive into previously unreleased archival live performances showcasing a trio that was already showing the confidence that comes with taking over the world. The newly released "Ace of Spades" 40th anniversary deluxe box set is another exhaustive look at the peak powers of Lemmy Kilmister, Fast Eddie Clarke, and Philthy Animal Taylor. The main record at the center of the celebration remains as timeless as ever, but once again, the real joy to be found is within the overflowing treasure of live audio, rarities and, this time around, excessively charming visual accompaniment.

The new remaster for the core "Ace of Spades" record doesn't really reveal anything we don't already know and love about the record, but one would think that anyone reading this website really doesn't need much poking and prodding to revisit the album. As vicious a mission statement that "Overkill" was and as much of a worthy follow-up that "Bomber" was, so too is "Ace of Spades" a perfect display of timeless power and dirty rock 'n' roll venom. The title track is still one of the purest adrenaline-rush producing drivers in the history of rock music, but what makes MOTÖRHEAD's records so enduring, beyond the band's more notable anthems, is their wedding of rock music's past — on display here with the super-charged garage blues of "Dance" — to where heavy music was moving, such as the thrashy burst of "The Hammer". The end result is a record that sounds less of its time than anything else that came out in 1980.

Kilmister affirms his iconic status across the board, but previously unreleased live performances, as well as alternate versions and instrumental demos, show just how truly vital Clarke and Taylor were to MOTÖRHEAD's success during that era. A performance in Belfast from December 1981 is the epitome of the band's motto, "Everything Louder Than Everything Else", with the band giving extra-snarling performances of "Too Late, Too Late" and "Motörhead". Taylor turns in a particularly blistering drum performance on "Jailbait", and a loose rock 'n' roll energy provides extra infectiousness to "Capricorn" and their cover of Eddie Holland's Motown standard, "Leaving Here".

The inclusion of a second concert from earlier in the year at first seems a little redundant, with a mostly similar set list and a soundboard recording that sounds a little muffled at times. But a few songs into the set, it becomes apparent that Clarke is having an incredible night on the six-string. Whether he is injecting a dance-inducing dose of boogie guitar on "Love Me Like A Reptile", providing a bit of rock swagger into that night's performance of "Bomber", or infusing "(We Are) The Road Crew" with a bit of extra shred, Clarke likely inspired multiple wannabe guitar gods on that March 1981 night in Orleans, France. Alternate versions and instrumental demos of the classic anthems that we have come to love also show how much chemistry the full trio had, even when simply jamming out.

Those of us in the heavy music community long ago claimed MOTÖRHEAD as a cornerstone of our Mount Rushmore, but the DVD contained within the deluxe set not only serves as a reminder of how humorously self-deprecating the band could be, but also how closely they were flirting with the top of the European pop charts during this era. The trio's pure likability helped them feel at home in the seemingly incongruous setting of the era's pop-music television showcases, even as a portion of the time's teeny-bopper audiences may have been blindsided by their music's heaviness. And as great as the music itself is, an appearance by the band on the ITV Saturday morning children's series "Tiswas" is bound to become just as beloved once this set is in the hands of fans.

All of the above, in addition to a forty-page hardcover book detailing memorable stories from this era, as well as a bonus comic book and tour program, lift "Ace of Spades"'s 40th anniversary set into another must-purchase for any diehard MOTÖRHEAD fan. So far, the opening of the vaults shows the evident love and care put into these efforts upon first cracking open the boxes, and that same love and care results in archival efforts that are worth revisiting in the years to come.