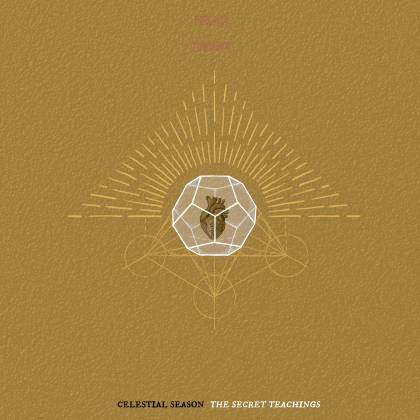 They may not ring too many bells for metal fans under the age of 40, but CELESTIAL SEASON were definitely a cool name to drop back in the '90s, when stoner rock and doom became dominant forces in the underground. The Dutch crew began as purveyors of morose, deathly doom, before morphing into bong-toting, psychedelic fuzz warriors. Oddly, both approaches suited them perfectly well, and a good few excellent records emerged as a result. Admittedly, CELESTIAL SEASON remain a cult concern and the arrival of "The Secret Teachings" has hardly been heralded as a big event, but connoisseurs of this stuff are strongly advised to give the band a second (or possibly third) glance, as they return in doomy splendor, knowingly harking back to the lysergic miserabilism of "Forever Scarlet Passion" (1993) and "Solar Lovers" (1995).

The first thing longtime fans will notice is that "The Secret Teachings" sounds vastly more powerful and evocative than any previous CELESTIAL SEASON record. The elegiac opening strains of the (sort of) title track alone make it plain that the band have expanded their textural repertoire and tapped back into the monolithic grandeur of early '90s doom in the process. The debt to PARADISE LOST, MY DYING BRIDE and "Serenades"-era ANATHEMA is obvious and unapologetic here, but CELESTIAL SEASON are endlessly creative within their genre purism, adding countless delicate sonic touches along their grueling road to spiritual oblivion. Oozing real sorrow but still wielding great heft, "The Secret Teachings of All Ages" is a particularly fine way to begin this endearingly chaotic, 60-minute sprawl. Almost every conceivable shade of doom is deployed along the way, sometimes with audacious ingenuity, as with "Long Forlorn Tears", which switches from funereal dirge to SABBATH-ian rumble and back again, violins spiraling and reverb as thick as tar.

"Salt Of the Earth" is the album's most overtly crushing moment: the opening riff is so primitive and grim, it may make your teeth itch. Midway through, it transforms into another opulent, melodic haunting, with vocalist Stefan Ruiters's bestial growl hitting subterranean frequencies amid a multi-layered haze of nefarious pomp. Similarly, "Lunar Child" is both utterly desolate and gently subversive; a doom anthem with no discernible hook or chorus, but an indecent amount of dark charisma.

There is a strong sense through "The Secret Teachings" that its creators are justifiably proud of their unique reputation and cult status. Not so much a return to former glories as a new and noble exploration of cherished ideas, this is almost certainly the finest CELESTIAL SEASON album yet.