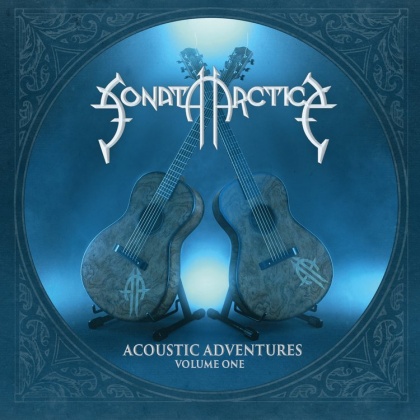 For melodic heavy metal bands with a substantial catalogue, the lure of the acoustic album is hard to resist. SONATA ARCTICA are more suitable candidates than most, thanks in part to the elegant, lyrical way in which frontman Tony Kakko writes songs. As much as the Finns are able to blow people away with nuts-out heavy metal bluster, they have long stood apart from their peers as something else, something more beautiful and more versatile than the power metal standard. As a result, while "Acoustic Adventures - Volume One" is plainly aimed at diehard fans, rather than the casual metal listener, the whole thing makes perfect sense and is performed with such delicate restraint that it is clearly no kind of cynical stopgap.

The opening "The Rest Of The Sun Belongs To Me" is the biggest draw here. Previously released in 2003, as a Japan-only bonus track for the seminal "Winterheart's Guild", it's as romantic and lovable as anything in the SONATA ARCTICA armory and benefits hugely from a wonderfully pretty and imaginative arrangement. The rest are roughly divided between the obvious hits and deeper cuts that presumably lent themselves to these more relaxed readings. "A Little Less Understanding", "Don't Say A Word" and "Paid In Full" fulfill the hits brief, and they all sound sufficiently refreshed to justify the conceit. Similarly, "As If The World Wasn't Ending" may not have jumped out as an obvious highlight from 2009's "The Days of Grays", but in this new, mellifluous form, it is transformed into a stunning but sober waltz, replete with bustling analogue keys straight from the prog rock handbook.

The downside to all of this is that SONATA ARCTICA's schmaltzier tendencies are given free rein in this context, and no amount of Mellotron can save the likes of early ballad "Tallulah" (originally from "Silence", 2001) from being cheesier than cheese itself. Likewise, "Alone In Heaven" is a pleasant enough song, but the sheer, shiny neatness of its arrangement is more hotel lobby background music than grandstanding emotion-fest. Luckily, "Acoustic Adventures - Volume One" ends in true SONATA style, with the gently unhinged "Wolf & Raven" – which rattles along at a breathless pace, like a drugged-out campfire singalong gone haywire — and "On The Faultline": a tremulous piece of work, even by Kakko's wonderfully indulgent standards, but the one truly killer ballad on the record, rendered in shades of grey and sodden with melancholy.

Rabid acolytes will savor every lavish second, which is just as it should be. SONATA ARCTICA remain a unique proposition in an overcrowded marketplace, and while this might be a bigger helping of sugar than most folk could digest, occasional small doses of this slick but eminently likeable detour are recommended.