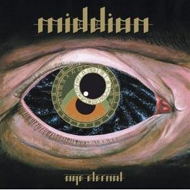 Mike Scheidt may have been the guitarist and vocalist of revered northwest U.S. space-doom freaks YOB, but the opening track of his new band's debut seems determined to highlight the differences between his earlier outfit and MIDDIAN. "Dreamless Eye" crashes out of the gate with a fast, aggressive, crusty old-NEUROSIS clatter, a much harsher and less psychedelic onslaught than YOB fans might expect. However, within a few minutes, Scheidt unveils a massive, throbbingly slow doom riff that stretches languidly into an agonizing slow drone, and the link between the two bands seems much stronger. The apple didn't fall far from the tree (even if it happens to be a crushingly massive and heavy apple).

MIDDIAN is still based on Scheidt's ethereal echo-chamber yowl of a vocal and bizarre clanging guitar chords, instrumental in creating a swirling psychedelic doom crunge that sounds beamed in from some decrepit deep-space satellite. But the new rhythm section of Will Lindsay (bass) and Scott Headrick (drums) seems more forceful on "Age Eternal", at least occasionally dragging Scheidt's cosmic navel-gazing into a rougher proto-punk realm, more home with the KYLESAs and RWAKEs of the world. This bit of earthy filth actually helps out, as it grounds these sometimes meandering sonic ruminations and adds a bit of dynamic, for those who found YOB's 20-minute excursions to be a bit too much.

Don't get me wrong, if you hated YOB, you're still gonna miss the point of MIDDIAN completely – really, despite the minor adjustments, Scheidt coulda gotten away with calling this the next YOB album, and it's a testament to his helluva-guy status that he changed the name when the other guys quit. No disrespect to them (or to Lindsay and Headrick) intended, but Scheidt is the show here, from the strange sounds and solid-granite tone he gets out of his guitar, to his bizarre Ozzy-down-a-well vocal style. It's his eccentricities that keep MIDDIAN from being run-of-the-mill doom, and provide their most leaden moments with a crackle of tension and a hint of more progressive, freaked-out vistas to come.

Unique, trippy psychedelic doom metal from beyond Alpha Centauri, frozen in the vacuum of space and crashed into earth like a wayward comet — MIDDIAN are definitely not for everyone, but they'll be a religion to the few who can hack it. Give it an hour and let the whole record seep into your brain, because this may be the least "singles friendly" band that ever existed. P.S. Don't miss the burly Ben Ward of U.K. stoner rockers ORANGE GOBLIN ranting at the end of "Sink To the Center".