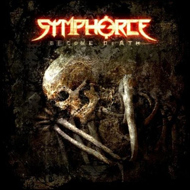 Another band that consistently puts out strong releases, Germany's SYMPHORCE follow up the style-expansion of 2005's "Godspeed" with an album in "Become Death" that nearly matches the quality of its predecessor (it falls just a hair short). With Andy B. Frank's (also of BRAINSTORM) powerful delivery and impressive range, as well as the unit's ability to infuse its modern power metal with catchy songwriting, "Become Death" is a disc that fans of not just metal, but of good music, should check out.

Several tunes offer vintage SYMPHORCE muscle and melody. The tough, down-tuned riffs and epic chorus of "When Darkness Fills the Sky" is a tune that immediately grabs you, while "Condemned" features semi-creepy keyboard effects and one of the album's most memorable choruses. The band ups the tempo on "Towards the Light", an out and out rocker with yet another strong melody. Toss "Death Has Come" and "Ancient Prophecies" into the batch of vintage heavy rockers as well. Changing things up, as the band is prone to do, "In the Hopes of a Dream" is mid-tempo and ballad-esque with beautiful piano and more of that SYMPHORCE riff-chunk and muscular bass work. Franck delivers in a darker vocal tone on "Inside the Cast" and "No Final Words to Say", the latter in particular boasting a TYPE OF NEGATIVE vibe. The album closes with the weird keyboards and electronic effects of "Lies", a tune that still ends up sinking its fangs into the listener as Franck moves from a kind of snarling croak into a soaring melody. It is Franck's changeups, as well as the range of guitar accents, throughout the album that give the arrangements character.

Here is to hoping that both SYMPHORCE and BRAINSTORM continue gracing us with such consistent efforts. It's nice to hear a band that doesn't over think its music and focuses on strong melodies and good riffs.