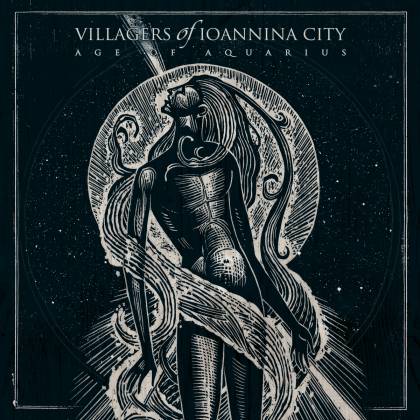 You don't have to be a weed-ravaged hippie with a passion for tripping the brain fantastic to enjoy VILLAGERS OF IOANNINA CITY. But it might help. Quite a lot.

Originally released in 2019, "Age of Aquarius" is getting a well-deserved reboot from NAPALM RECORDS, and it's not hard to see why the label was so keen to snap this Greek band up. There are certainly multiple ways to achieve a higher state of consciousness while listening to heavy music, and many of them are a lot more obscure and left field than this, but it's extremely rare to hear an album that so skillfully bridges the divide between psychedelic exploration and honest-to-goodness, balls-out heavy rock — with actual tunes.

Opener "Welcome" sets the scene impeccably, in fact, it might as well storm your living room and erect a giant lava lamp, while forcing you to take blowbacks from joints the size of Doyle Wolfgang Von Frankenstein's forearms. With clear echoes of MONSTER MAGNET but with the skygazing spaciousness of PINK FLOYD plainly evident, this is truly widescreen stoner rock, and vocalist Alex is an instantly charismatic focal point. And yes, given the album's title you may well be expecting to be bombarded with mystical claptrap and dewy-eyed notions of spirituality, but even though your ears may become permanently tie-dyed during the process, the eventual eruption into the epic title track is so perfectly executed and so sonically rich and immersive that you can either go with it or look elsewhere. A sense of melodic simplicity is all-important here, too. VILLAGERS OF IOANNINA CITY have often been described as a folk-rock band, and while the likes of "Father Sun" and "Dance of Night" are often admirably heavy and bombastic, there's a lightness of touch on display, drawing the maximum effect from each and every dynamic. Old-school touches, like occasional ripples of Hammond organ, mingle beautifully with weeping strings and sweeping keys, while an underlying core of hypnotic riffs and glacial, solo-heavy crescendos ensures that "Age of Aquarius" always retains its roots in the SABBATH-ian bedrock.

As if all of that wasn't enough, there are numerous detours into prog territory, most effectively on the TOOL-meets-ANATHEMA clangor of "Part V" and the surging krautrock travelogue of "Cosmic Soul". Every time the VILLAGERS seem to be straying away from their psyched-out template, they deftly rein things back in via some seamless transition or act of textural sleight of hand. Whether spontaneous or calculated — and either is perfectly acceptable, let's face it — this band have nurtured their own singular identity to the point where this music sounds utterly timeless and, should fortune truly favor the brave, destined for big stages and many minds blown.

Of course, if you're running a bit low on peace, love and understanding, soaring away on a psych-metal magic carpet ride might not seem especially appealing. But these are stressful times and VILLAGERS OF IOANNINA CITY have got your spiritual six, whether you want to get high on their thunderous supply or not.