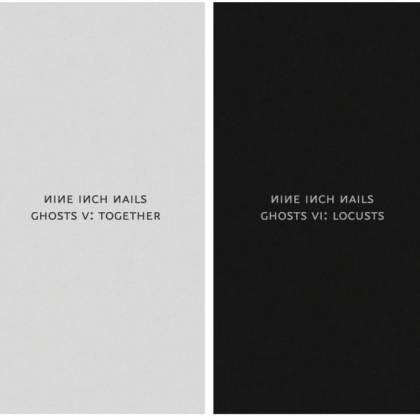 The notion that art can be a refuge and sanctuary couldn't be any more relevant than now, during our collective confrontation with the global chaos and uncertainty that's associated with the coronavirus. No one will save the world with their music nor their music collections, but music can be a lifeline for some individuals. There is no better time than now for NINE INCH NAILS to enter the room and save the day. The legendary act has just dropped "Ghosts V: Together" and "Ghosts VI: Locusts" on the band's website as a free download, and Trent Reznor and company have, not surprisingly, delivered impressive material yet again.

More than a decade has passed since NIN's initial, related effort: "Ghosts I – IV", a sedated and numbing collection of instrumental tracks. Here, Reznor is of course once again joined by longtime collaborator Atticus Ross. Continuity from the recent "Add Violence" and "Bad Witch" releases strings through the current "Ghosts" effort in terms of the cinematic approach, the element of rage, and with regard to the masterful employment and utilization of negative space.

Compared to the numerous experimental, drifting tracks on "Ghosts I – IV", the new releases are delivered with a relatively greater sense of cohesion and unity. While the 2008 version of "Ghosts" featured generic, placeholder track titles, the new songs have traditional song titles, and they flow together more concisely, logically and mellifluously.

"Ghosts V: Together" exudes a sense of optimism via ambient and soul-searching soundscapes. Silence is given breath and life with the spacious humming and swelling of simple, innocent piano parts and calm, buzzing electronics. "Your Touch" exhibits an almost (happy) drunken stagger that spreads apart but eventually finds its way home as the pieces start coming together. And album closer, "Still Right Here", adequately foreshadows the second album of the double-headed release with its references to the classic aggressive side of early era NIN.

If this first part represents humanity's hope for a better tomorrow, "Ghosts VI: Locusts" takes a turn toward the dark side. The angst is much more tangible. The nail-biting anxiety of humankind in our current state is much more palpable. It's also the more exciting album of the duo. "When It Happens (Don't Mind Me)" is jarring with its stabbing keys and chords that strike like a flesh tenderizing hammer. And spastic, seizure-inducing trip-hop colors "Run Like Hell", a track that is otherwise suffocating with darkness. It's just as inspiring as it is unsettling.

Sure, the new "Ghosts" collection is much more defined and cohesive in comparison to the first "Ghosts" release twelve years ago. But that is relative. Reznor had an element of youthful arrogance and know-it-all sense of purpose with his defiant releases decades ago. Most of us think we know it all when we are fresh, green buds. But the new releases entail a sense of wandering, a sense of wondering. Reznor has become humbler with age. It seems he feels the uncertainty that we all do, if the new "Ghosts" is any indication. And, most importantly, the new "Ghosts" exhibits a sliver of undying hope.