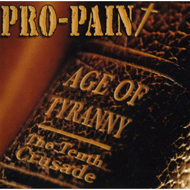 Throughout their long and storied career, PRO-PAIN has clung to their metallic hardcore formula with dogged tenacity, long before anyone talked about "crossover" (in the 1990s sense) or "metalcore." There have been times where it seemed like the band was phoning it in, but they really turned a corner on 2005's "Prophets of Doom", injecting their simplistic, catchy metal attack with renewed energy and fury.

Now, though, "Age of Tyranny" may just set a new high-water mark for PRO-PAIN's career. The state of the world has got frontman Gary Meskil in a murderous frame of mind, and his lyrics positively seethe with disgust at the Iraq War, the demise of the American middle class, and the fat cats who sit above it all counting the cash and looting the collection plate. The band steps up behind him with some of their most inspired riffing to date, and a series of dynamic musical choices that will startle even longtime fans used to their previous baby steps in this department. Female vocals in "Beyond the Pale"? A multilayered choir in "All For King George"? Weird, drum-driven tempos in the verse of "Pigs In Clover"? Blazing thrash and frantic twin-guitar melodies in "Leveler"? Yep, and it all works, making "Age of Tyranny" a diverse and varied listen without ever once letting up on the intensity.

Of course, the PRO-PAIN stock in trade — burly, catchy workingman's riffs and Meskil's pissed-off shouts — is in evidence in spades here. But even the most "typical" PRO-PAIN exercises here are infused with a fresh batch of venom and teeth-grinding intensity. It's a do-or-die record from a band that could get away with coasting, one that should (in a just world, anyway) propel these guys to the top-tier ranks of bands like HATEBREED who grew up sniffing PRO-PAIN's exhaust before taking the basic concept and running for the goal line with it.

If you haven't bought a PRO-PAIN album since their heady days of ICE-T guest appearances and "Contents Under Pressure", or if those few soggy albums in the middle of their discography put you off the band, consider this your official notification that PRO-PAIN is back. They're kicking ass, taking names, and raising hell for the common man, and we may just need them now more than ever. Chalk this one up as one pleasant boot-to-the-head of a surprise.