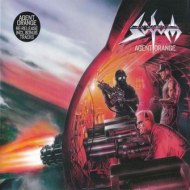 At the risk of overusing yet another MOTÖRHEAD reference, SODOM is in fact considered by many to be the German MOTÖRHEAD, based on their prodigious and fairly consistent catalogue, their long-running tenure, and vocalist/bassist Tom Angelripper's Lemmy-like stature in the world of thrash metal. The SPV 20th anniversary reissue of "Agent Orange" celebrates the album that solidified the Teutonic titans' place in the annals of thrash metal history and offered fans a much better production to go along with some of the band's most beloved anthems, which matched the always biting riffs with song structures that were built for lasting appeal.

That so many of these songs stand out in SODOM's long and distinguished career speaks to the quality of the album as a complete listening experience. Cuts like the title track, "Tired and Red", and the lyrically controversial "Incest", rip with as much ferocity as any songs recorded before or after, bolstered by Angelripper's growling bass lines. Yet "Remember the Fallen" demonstrated another side of the band, one vaguely reminiscent of METALLICA's classic output because of its mid-paced chugging cadence. "Ausgebombt" serves as another highlight for its downright peppy, punk-fueled delivery. The cover of TANK's "Don't Walk Away" refreshed as an album-closer with a decidedly rock-and-rollin' approach. The inclusion of a bonus second disc with live renditions of "Agent Orange" tracks features SODOM in its natural un-caged environment, while the German version of "Ausgebombt" is an additional treat. Angelripper's liner notes are written with pride in an album that took SODOM to new levels of worldwide recognition. For those that haven't yet gotten the gist, the appearance of any resemblance of "suck" on this long player is conspicuously absent.

Fans will always debate the pre and post "Agent Orange" output and the earlier works are to this day worshipped by the diehards for their "kvlt" aesthetics. But any objective view of SODOM's career will pronounce "Agent Orange" a phenomenal thrash metal album and one that waves the flag of the proud German tradition. Highly recommended with thrashing urgency.