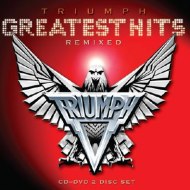 When one thinks of Canadian power trios RUSH may be the first that comes to mind, but TRIUMPH is a close second. As far as definitive area rock is concerned, TRIUMPH may actually nab the top spot. When bassist/keyboardist Mike Levine and drummer/lead vocalist Gil Moore started the band in 1975, practicing in a bowling alley, the mission was never anything short of world domination. After finding the final piece of the puzzle in guitar hero Rik Emmett, the stage was set for an impressive run of gold and platinum classic hard rock albums that included "Just a Game", "Allied Forces" (in my opinion, the magnum opus),"Never Surrender", and "Thunder Seven" that spawned a slew of AOR radio hits like "Lay it On the Line", "Hold On", "Fight the Good Fight", "Magic Power", "Never Surrender", and "Follow your Heart", all of which are featured in this superb compilation, remixed for maximum audio output.

Every one of these 14 tracks is a smash, save for the previously unreleased, and irksomely awkward, version of NAZARETH's "Love Hurts". With Emmett supplying the riffs and solos of guitar god proportions, as well as the upper register lead vocals, Moore doing his Canadian John Bonham impression and offering the deeper/bluesy lead vocals, and Levine filling every other nook with low-end boom, keys, and backing vocals, the collection showcases the band's immense talent and stone cold knack for penning gigantic hooks. From the blues-based bombast of "When the Lights Go Down" to the epic "Fight the Good Fight", the hard rock strut of "Spellbound", the mid-'70s ball busting of "Rock and Roll Machine", and the pop-flavored infectiousness of "Somebody's Out There", TRIUMPH is rock 'n roll fire personified.

Much like many bands of the '80s, the corporate machine began wielding it influence on later albums like "The Sport of Kings" from which power ballad "Just One Night" and "Somebody's Out There" are taken, though both still represented the trio's rock power and melodic mastery (more so on the latter). It was on 1987's "Surveillance" though when TRIUMPH fell victim to the hair band virus, as one can hear on the middling "Never Say Never". That may be why it is not included as one of the 14 tracks on the CD, but instead as a video on the accompanying DVD.

The DVD however provides an excellent snapshot of TRIUMPH's prodigious stage talents and legendary light/laser spectacles. The video collection includes most of the aforementioned CD cuts, including a larger than life performance of "Allied Forces" at 1983's US Festival in front of a half million fans on "Heavy Metal Sunday". The DVD bonus material includes rather forgettable videos for "Child of the City" and "Love Hurts" performed by what has come to be known as TRIUMPH v2.0 with Phil X, about which further discussion is unwarranted for reasons that long time fans will understand, as well as a "fan cam" video for "Blinding Light Show". The Canadian Hall of Fame induction footage is however most worthy of the term "bonus".

The inclusion of a few low-point peeks is nonetheless necessary in capturing a retrospective view of TRIUMPH's storied career. "Greatest Hits: Remixed" is a mandatory package even for folks that may already own the original albums and a grand introduction to any fan of classic hard rock that had somehow missed the band the first time around.