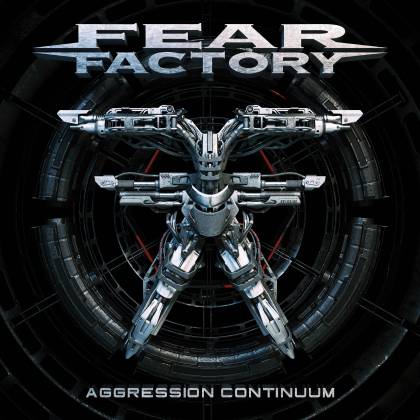 FEAR FACTORY is a groundbreaking band: this fact is simply indisputable. The pioneering act has been a part of industrial metal, groove metal and nu metal's genesis. Burton C. Bell was at the forefront of the dichotomous "good cop/bad cop" vocal styling by virtue of his early work, which pitted his coarse screaming against his soothing, melodic singing. Six years have passed since 2015's "Genexus", and on the California band's 10th studio album, "Aggression Continuum", fans are being treated to 10 new tracks. The impact of the new effort is just as brutal and beautiful as the aforementioned vocal contrast.

The new album is just as captivating as it is bittersweet because, at this juncture, it is the last to include Bell's signature vocals — one of the band's original members, and the only vocalist it has had — who parted ways with the unit last year following years of acrimonious litigation. "Aggression Continuum" is one hell of a way for Bell to leave his final mark upon the band's legacy. It's hard to imagine FEAR FACTORY without the charismatic frontman's distinct and passionate vocal delivery, but with that said, he's certainly not the only piece of the puzzle. His performance, as well as that of drummer Mike Heller, the relative newbie who is well-known for his work with the New York death metal band MALIGNANCY, and founding member, guitarist and songwriter Dino Cazares, are all quite impressive. Collectively, the unit's performance and passion is undeniable and powerful, lending to what is one of the best albums in FEAR FACTORY's catalogue.

"Monolith" offers a slow groove that seems atypical from expected, pairing Bell's crooning with Cazares's softer, restrained and jagged guitar work. The song's pop music qualities aren't unknown to the band; however, the delivery is distinct and exists on a trajectory outside of what has previously existed in FEAR FACTORY's playbook. This approach doesn't work at all on "Purity", a song that noticeably lacks the fortitude that the band is known for. Few warts aside, "Aggression Continuum" stands above most of the act's post-2000 albums because of Cazares's adventurous guitar work on songs like "Disruptor", "Fuel Injected Suicide Machine" and "Aggression Continuum".

"Aggression Continuum" seems to be the end of an era for FEAR FACTORY, a band that made its mark over the years. If that is indeed the case, the band moves forward in style.