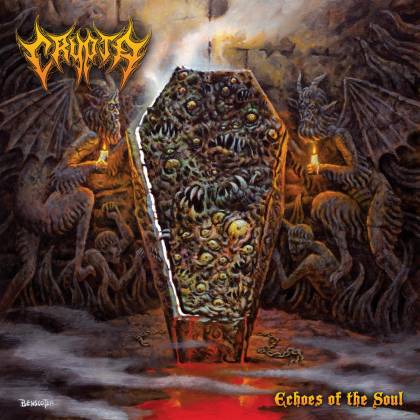 Echoes Of The Soul

With touring opportunities as limited as they currently are, launching a debut album might not be the wisest move right now, but newly formed quartet CRYPTA have other ideas. Created by former NERVOSA members Fernanda Lira (vocals/bass) and Luana Dametto (drums) and completed by guitarists Sonia Anubis (ex-BURNING WITCHES) and Tainá Bergamaschi (ex-HAGBARD),this band have existed for barely two years, and yet their first record sounds like the work of scabby-knuckled veterans with the spirit of old-school death metal coursing inexorably through their veins. A lot of modern death metal eschews swing and swagger in favor of precision and maxed-out sonics, but "Echoes of the Soul" proudly pursues the original left-hand path, with sound that combines the ferocious power of early POSSESSED and KREATOR with the venomous hooks and warped structures of early CARCASS and AT THE GATES. The end result is somehow more gleefully psychotic than any of them.

This is far from a myopically retro-minded exercise, however. CRYPTA have written nine killer songs at the first time of asking and performed them with wildly exhilarating levels of intensity. In fact, scabrous hymns to the dark like "Possessed" and "Death Arcana" sound like genuine live performances, this relatively untested foursome's instant chemistry plainly on display throughout. Meanwhile, Arthur Rizk's formidable mix ensures that CRYPTA sound like a juggernaut being driven through your living room, even on more pointedly melodic fare like "Shadow Within" and the relentless onslaught of "Kali". When the tempo drops to a crushing, panzer-like mid-pace for "Under the Black Wings", their deft assimilation of both thrash and black metal into this febrile hybrid becomes self-evident, while "Blood Stained Heritage" is one of purest examples of balls-out, extreme heavy metal anyone will hear this year. Best of all, "Dark Night of the Soul" is CRYPTA's grand moment of epic horror, as Fernanda Lira spits the grimmest of threats over a swirling maelstrom of IMMOLATION-worthy riffs at their imperious best. After that, the closing "From the Ashes" feels like a particularly generous bonus, and another gloriously nasty wall of studs, spikes and Satan.

A debut album to cherish, while we wait for a chance to see CRYPTA let rip in the flesh, "Echoes of the Soul" is ludicrously exciting, and laudably death metal as fuck, from bruising start to creepy finish. Bravo.