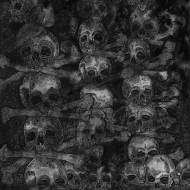 Italy's THE SECRET don't like to speak about the passing metalcore trappings of their first LP, and they frankly shouldn't have to after dropping one of the heaviest, nastiest slabs of blackened crust-core of 2010 in the shape of their eye-opening third album, "Solve et Coagula".

Two years later, the band is keen to make it two, sonically decapitating statements in a row via 2012's similarly intentioned "Agnus Dei" - the title of which curiously references the classical Latin translation for "Lamb of God" as found in the gospel of John, and sparks numerous possible theories to explain its choice.

Could THE SECRET be offering up this fourth album as a sacrificial token to atone for those minor metalcore sins past? No, not bloody likely. Or is the band perhaps willingly sacrificing itself on the altar of all music labeled "crust-something" in recent years, as it threatens total market saturation, with plenty of help from the band's label, Southern Lord?

Who's to say, but man, oh man, if their Italian-speaking mamas only knew what these ragazzi were saying about Jesus and his pals on "Agnus Dei" - after all those years of well-meaning catechism! Just take a look at song titles like "May God Damn Us All" and "The Bottomless Pit" for signs of what's in store, then listen in as CONVERGE's Kurt Ballou (yes, him again) helpfully twists every available knob labeled "EVIL" on the studio's soundboard to its Satan-praising limit here.

Indeed, "Agnus Dei" seems even more preoccupied about calling out the Vatican's failings than usual, and it backs up its bile and vitriol with a particularly savage display of raw, black metal-infused crust-core fury more pointed and remorseless than even its noteworthy predecessor, sacrificing some of its contrast-affording dynamic variances and atmospheric nuances, in the process.

And while doom-laden slower songs like "Post Mortem Nihil Est" (translation: "After Death there is Nothing" - GULP!),"Vermin of Dust" and "Heretic Temple" still crop up now and then, "Agnus Dei" is altogether dominated by no-holds-barred, blast-beaten immolations such as its title cut, the minute-long "Violent Infection", "Darkness I Became" and "Obscure Dogma" (see also the 50-second, grindcore-bordering "Daily Lives") - all of which invariably leave naught but piles of human ashes in their devastating wake.

All of which may leave listeners wondering whether they are in fact the sacrificial lambs at the end of the day, and THE SECRET simply their able executioners.

In any case, as the saying goes "it's better to burn out than to fade away," and the men behind THE SECRET state their choice all too clearly throughout "Agnus Dei".