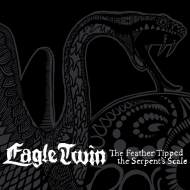 The Feather Tipped the Serpent's Scale

Much like Tibet, the remote, mountainous, mythical country of Utah (pronounced OOO-tar, we are told) isn't known for producing a vast quantity of music; but we can tell you on good authority that its not just winds howling up in them thar hills, but a legendary creature known as the EAGLE TWIN.

All kidding aside, there's a palpable sense of the mystery about this Salt Lake City duo, whose 2010 debut, "The Unkindness of Crows", carved a raw and ragged furrow across the doom/drone landscape that its 2012 follow-up, "The Feather Tipped the Serpent's Scale", evidently attempts to fill in with the musical equivalent of mammoth gristle and dinosaur bone shards.

"The Ballad of Job Cain" is a two-part trawl through intentionally lo-fi sounds awash in decaying feedback and replete with evolving ideas, rather than protracted repetition. Gentry Densley's guitars generate sounds seemingly wrung from the fists of giants; twisting each song's multiple rumbling riffs into painful grimaces amidst occasional, mud-caked melodic flights. Their drums, as hammered out by Tyler Smith, are surprisingly less thunderous than you might expect; rejecting the usually thunderous funeral doom cliches by means of skins snapped tight for an almost jazz-like contrast to the surrounding, amorphous pandemonium. Densley's vocals, meanwhile, alternately challenge and conform to this music's, brutish, meandering ways; often sinking to subterranean tones that reverberate deep in his, or the earth's bowels - it's truly hard to tell.

"Adan (Lorca)" is the second song here to begin with Densley's guttural chanting, and third in a row averaging nine minutes of cruel enchantment, so it's clear that EAGLE TWIN orchestrated the album's climax to arrive via the even more monolithic centerpiece, "Snake Hymn" (over eleven minutes, but who's counting!),because in its wake come three, surprisingly bite-sized musical morsels. "Horn Snake Horn" builds from ethereal calm into a cathartic guitar solo; "It Came to Pass the Snakes Became Mighty Antlers" (yes, there are lots of snakes in here) revels in circular riff hypnosis of a surprisingly urgent nature; and "Epilogue: Crow's Theology" grinds into gear like a cover of SLEEP's "Dopesmoker" before veering back and alighting in EAGLE TWIN's very own musical eyrie.

At the end of the day, "The Feather Tipped the Serpent's Scale" continually shifts between the realms of doom and drone, as advertised, and its songs also prove surprisingly easy to absorb, yet remarkably complex for long-term discovery over repeated listens. This, it becomes increasingly clear with every spin, is the actual secret behind EAGLE TWIN's exotic appeal - not their geographical isolation in the distant realm of Utah.