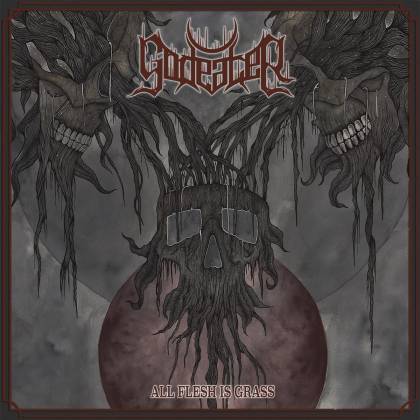 All Flesh Is Grass

The UK's death metal scene is currently healthier than it has been in decades. It's also becoming increasingly diverse, which probably explains why it doesn't seem particularly weird that GODEATER's debut album is a concept record concerning veganism and notions of ecological peril. It's hard to imagine any old-school death metal band complaining about the impending death of the planet — it is, after all, no more than we deserve — but times change, and modern extreme metal isn't created in a vacuum. The fact that someone is making angry, brutal music about something that genuinely does matter in 2019 should be a cause for celebration, whether you enjoy a rare steak or not. CATTLE DECAPITATION have been banging this same gong for nearly 20 years now, so "All Flesh Is Grass" is hardly revolutionary in thematic terms, but GODEATER deliver their message with such astonishing vigor, vitriol and ingenuity that it's hard to imagine any diehard death metal fan not being dragged along for the ride, even if the individual concerned really, really hates hippies.

As they proved on last year's one-off single "Exsanguinated", GODEATER have a unique approach to modern death metal. Undoubtedly rooted in the genre's technical wing, they also have a mischievous penchant for symphonic embellishments and unpredictable arrangements. "All Flesh Is Grass" packs in an insane amount of musical ideas in its 33-minute duration, and while the band's technical skills are unquestionable, it's the sharpness of their songwriting and the startling chemistry they share as a unit that impresses most.

Opener "Anoxia" is an astonishing two-minute demonstration of prowess that leaps from all-out blasting to jagged prog sidesteps, all peppered with off-kilter embellishments. It leads directly into "Eternal Ending", a more measured but no less bewildering collage of warped riffs and brooding, quasi-orchestral atmosphere. You can hear the influence of DIMMU BORGIR lurking here, but it's only a passing resemblance: GODEATER are spiritual heirs to Floridian technical death metal, but with a Puck-like compulsion to disrupt and confuse, like a super-extreme version of BETWEEN THE BURIED AND ME with no time to fuck around. Recent singles "Silent Spring" and "Inertia Haze" are arguably the most succinct and impactful things here: furious bolts of nimble-fingered noise, they manage to sound oddly cinematic, despite the relentlessness of those rat-a-tat snare beats, and wield far more melodic weight than you might expect amid such high-octane showboating. The album's one genuine epic, "Salvation", creeps purposefully towards the eight-minute mark, armed with juddering post-djent riffs and flickering synthesized sitars, but stopping off for a destructive, symphonic post-metal funeral march midway through. Meanwhile, "Blood Moon" provides "All Flesh Is Grass" with a dramatic, destructive finale, powered by churning dissonance and blessed with a lush, ethereal midsection.

As debut albums go, "All Flesh Is Grass" could hardly have been more meticulously conceived or executed. Whether it will convince anyone to stop eating meat or to care more about the environment is open to debate, but if you are really going to try to change the world, you might as well make a seriously fucking brilliant death metal album at the same time, right?