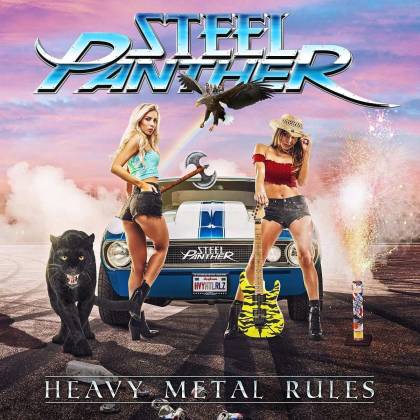 They really are a ridiculous bunch, STEEL PANTHER. When you consider how combining music and comedy is one of the most perilous artistic endeavors imaginable, the fact that Michael Starr, Satchel, Stix Zadinia and Lexxi Foxx have kept this nonsense up for the best part of 20 years is impressive enough in itself. When you then consider how hugely successful STEEL PANTHER have become along the way (they are, after all, an arena band in numerous countries),it's hard not feel a profound sense of relief that at least someone is doing a good job of putting smiles on our faces in turbulent times. The reality is STEEL PANTHER have outlasted and outgrown that enticing, initial flash of novelty value: regardless of how joyously idiotic the lyrics on "Heavy Metal Rules" often are, there is still a ferocious intelligence driving this whole thing. It's unquestionable that if you replaced the band's lyrics with something more sensible, these would still be absurdly catchy and memorable songs. All jokes aside, STEEL PANTHER are a genuinely brilliant '80s-inspired heavy metal band. It's just that despite being immensely talented, middle-aged musicians, these boys simply can't stop being seriously obnoxious (and funny),too.

Ultimately, a STEEL PANTHER album flies or falls on the strength of its choruses and the sharpness of the punchlines. As reliably entertaining as they are in the flesh, the band's last three albums never quite scaled the heights of 2009's remorselessly great "Feel The Steel". Happily, "Heavy Metal Rules" is easily their strongest record since then and boasts several of the smartest and funniest songs they have ever written. "Let's Get High Tonight" is an early highlight, with Michael Starr cheerfully announcing that "Mom and dad are out of town/Call the whores, it's going down!" over riffs of laudable sleaziness. No, the era of #metoo and #timesup has had zero impact on STEEL PANTHER, for which we can all be truly thankful. Anything else would completely ruin the whole enterprise, because, of course, Satchel and the others are immune to enlightenment: that's what the drugs are for, dummy.

It would spoil the surprise to list lyrical highlights, even from an album that has an abundance of such things, but "Fuck Everybody"'s laundry list of petty day-to-day complaints is an absolute instant classic with a superbly wonky, jazz-tinged guitar solo from Satchel that, perhaps intentionally, sounds like Steve Lukather after a coke binge. Meanwhile, recent single "Always Gonna Be A Ho" is a sublime, perfectly crafted power ballad with an enormous chorus and some really unpleasant mental imagery. "I kissed your mouth," croons Michael Starr, "and tasted Satchel's dick". So that's nice, then.

Let's face it, you either find STEEL PANTHER endlessly entertaining or you will do everything you can to avoid hearing "Heavy Metal Rules" in the first place. The surprise here is that rather than battling with the law of diminishing comic returns, the band's musical brilliance and irrepressible sense of mischief has pushed them to make their finest record in a decade. Satan only knows, we all need cheering up every now and then.