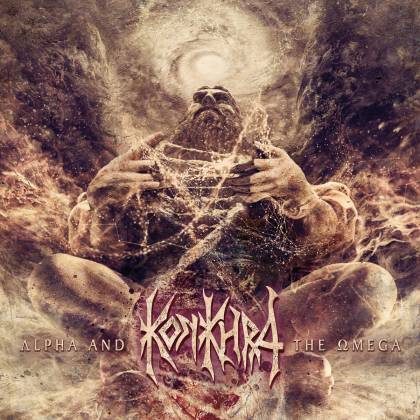 Alpha And The Omega

Death metal fans of a certain age will already be familiar with KONKHRA. One of the few bands to successfully blend the brutality of the underground with the churning grooves popularized by the likes of SEPULTURA and MACHINE HEAD in the mid '90s, they never received the recognition that albums like "Spit Or Swallow" (1995) and "Weed Out the Weak" (1997) deserved. It hasn't helped that founder and frontman Anders Lundemark has been far from prolific: "Alpha And The Omega" is only KONKHRA's seventh album in 30 years. Fortunately, it's also the best thing they've ever done.

Far from sounding like a relic from decades past, the Danes' sound has aged incredibly well and fits perfectly with much of the groove-based extremity that is currently enjoying such a surge in popularity. A slightly clicky kick-drum aside, the production here is raw, punchy and crushing, and even outstrips the jaw-shattering nastiness of those early classics. Most importantly, however, KONKHRA are continuing to evolve, assimilating moments of grand, almost symphonic bombast into an otherwise relentless barrage. Songs like "Thoth" and "By Instinct Be Driven" are the obvious highlights here: flexible and fluid upgrades to that deathly formula, with jarring hooks and pitch-black, deeply menacing undercurrents all adding to a sense that this band have been reborn as something far more impressive than before. The snarling but expansive "Darkest Millennium" provides a particularly enthralling climax, across seven minutes of blackened lurching and slashing that takes an explosive, dramatic detour into progressive thrash territory before machine-gunning its way to a brutish conclusion. The closing "I Am Ra" — a heads-down, last-man-to-the-end-pays-for-dinner death metal tirade — almost feels like an unnecessary afterthought, such is the dark majesty of what comes before. Nonetheless, "Alpha And The Omega" leaves no violent stone unturned in its quest to make you bang your head. Admirable, really.

In a year that has been (for me at least!) dominated by death metal at the ultra-modern but insanely brutal end of the spectrum, KONKHRA's intuitive blending of old and new stands out as something genuinely distinctive and forward-thinking. Cult status be damned: this is a killer extreme metal record, executed with imperious flair by unsung masters of the craft.