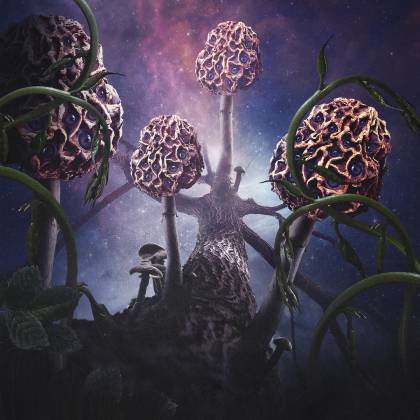 Black metal, perhaps more than any of metal's sub-genres, is associated with a conservative mindset — oftentimes politically, yes, but certainly overbearingly in a musical sense. It's a double-edged sword. The outlook benefits the style due to the associated maniacal devotion of fans who rally with consensus around great music; yet, on the flipside, and intuitively enough, the mindset fosters stagnation. But in the entity's nearly quarter-century-long span of existence, BLUT AUS NORD simply hasn't given a damn about any of that. The avant-garde, industrial inclined black metal band has broken black metal and boiled it down to the core, tried-and-true elements and subsequently reconstructed them into an adventurous artistic expression that's bold, free-form in impulse, yet driven by purpose. But make no mistake about it: BLUT AUS NORD doesn't peddle stereotypical, post-modern drivel. This is the real deal.

The Frenchmen have, not surprisingly, turned over a new leaf as they've returned with "Hallucinogen". BLUT AUS NORD has eschewed their signature industrial surge that was present through their previous effort, 2017's "Deus Salutis Meæ", to make room now for an extremely melodic venture that's ironically more in tune with relatively conventional black metal. "Hallucinogen" is progressively geared enough to capture the imagination of fans of modern day ENSLAVED on an exceptionally dynamic track like "Anthosmos", a song that begins with lush, swelling, majestic clean guitars. Subdued choral vocals weave in and out of the repetitive, hypnotic riffs and movements on songs like "Nomos Nebuleam" in a way that is likely to channel many listeners into an introspective realm. BLUT AUS NORD doesn't exactly lull listeners so much as they tenderize the mind to the point where one might have their eyes roll to the back of the head while a stream of drool pours from the chin.

Midway through the aforementioned song, a gnarly CELTIC FROST-like, mid-paced, foot-stomping black 'n' roll riff kicks in within the dreamlike ambience. It somehow makes sense. The transitioning is simply masterful. The staple black metal elements of raspy vocals, double-bass battery and rapid tremolo picking are abundant on tracks like "Sybelius", but rather than striking with venom in the vein of MAYHEM, the impact and intention are more parallel to TANGERINE DREAM or even CAMEL.

BLUT AUS NORD was probably trying to be outlandish and odd, to an extent, with an earlier effort like the industrial-heavy "Odinist: The Destruction of Reason by Illumination" (2007). They have become mature and seasoned — older, to be blunt. The Frenchmen are truly natural in their songcraft which remains just as transcendental, ambitious and psychedelic. The resulting approach and development has led to "Hallucinogen", a more rewarding creative offering.