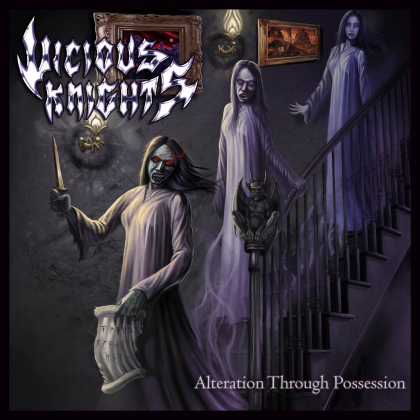 1. Infestation
2. From Nothingness (To a Slave of Darkness)
3. The Boneghoul King (The Miserly)
4. They Cast No Shadow
5. Sleep With the Ghouls
6. Vicious Knights
7. Swing from the Grave
8. It Was In My House
9. Disenchanting The Matter (The Statue Is Alive)

Greek trio VICIOUS KNIGHTS rest firmly on the thrash end of the metal spectrum. Whereas the majority of newer bands walking along those paths are content with recycling riffs from EXODUS's "Bonded By Blood" era, "Alteration Through Possession", the act's debut full-length, takes its inspiration from the darker and more sinister cornerstones of thrash metal's yesteryear. The record is at times evocative of seminal acts such as KREATOR and scratches up against the layers of death metal piled onto the thrash blueprint by POSSESSED, with touches of the early days of black metal that other modern acts such as MIDNIGHT use to bolster their sound.

There honestly is not much here that you likely have not heard before. VICIOUS KNIGHTS do manage to overcome that sense of familiarity and déjà vu with "Alteration Through Possession". The energy level remains high and infectious from start to finish. The individual approaches of the trio's members to their duties emphasize raw power and speed over technique. There are, admittedly, moments here and there where the proceedings get a little sloppy. The raw energy of the band members individually go a long way in powering through those moments to keep everything moving in a positive direction. Liakos's drumming performance does not show much in way of flash or technique. He instead seems solely focused on simply hitting his drums as loud and hard as possible, with brute force being his sole directive. Panos's bass lines and Harvester's rhythm guitar riffs and solos are also administered with similar preference for power over pizzazz.

Another factor giving the record an inviting energy is the band's lyrical and thematic focus which steps away from the nihilism favored by many similar modern acts. They instead trade in beloved old-school horror movie and literature tropes that made so many records from the past, present and very likely future so much fun. Bits of spoken-word dialogue usher in the thrash assaults of "The Boneghoul King (The Miserly)" and "It Was In My House", as if the song titles themselves didn't already give you a sense of the band's direction here. The furiously ripping album-closing "Disenchanting The Matter (The Statue Is Alive)" is peppered by a flourish of spectral monsters lending their ghoulish sound effects to add to the ghastly aura. The guttural, gruff and gravelly vocal shouts by Harvester also lend a helping hand in playing to that sense of atmosphere.

"Alteration Through Possession", which follows up their 2018 EP "Malevolent Spirits" isn't a statement from a band destined to become future legends. It is still a very welcome diversion for those that like their thrash delivered with raw energy, power and speed.