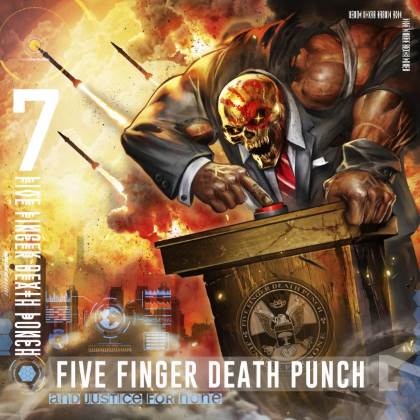 And Justice for None

"Blabbermouth can fucking suck it, 'cause they never fucking knew me..."

Never underestimate the power of publicity, positive and negative. Ivan Moody and FIVE FINGER DEATH PUNCH are riding their latest mount of angst rock into the summer as early on concert breadwinners. Yet surrounding Moody is unnecessary hullabaloo as he fights personal demons on a road to hopeful sobriety, his inspiration reportedly coming in part from the deaths of Chris Cornell, Lynn Strait, Scott Weiland and Chester Bennington.

The Internet providing a limp-dick portal for keyboard warfare, it's not really amusing to watch Moody react with out-of-character calmness to "fucking hilarious" cyber-based catcallers here at B-mouth. His retorts of: "I'll be sure not to give you backstage passes," to snidely roasting a commenter as having a "serial killer name" is an exhibition of a seizure-barraged man who's had his chip knocked off too many times. You can understand his defiance, but it's nonetheless a stinking state of affairs between a musical public figure and a public seldom held accountable for its frequently insensitive, long-distance shit slinging.

Moody being no stranger to carpet-bombing FIVE FINGER DEATH PUNCH albums with "fuck" missiles galore, the song remains annoyingly the same on the band's seventh, "And Justice for None". Proof in the pudding with "Fake"'s ribald—and frankly juvenile—litany of hatred, the huffing rap rock of "Sham Pain" and "It Doesn't Matter", where Moody would soon see his targets waiting for purgatorial sentencing at the gates of Hell. One would assume these messages were first silently shouted through the arduous process of detoxification. If there is catharsis to be had, Ivan Moody is still looking for it, musically speaking.

The shred-happy breakdown on "Fake" is the song's only moment of grace, but let it be said there are plenty of folks out there looking for vengeance-is-mine songs to blow off steam from a bad day—or worse, an entire month's worth of them. Even at fullest wits and capacities, what Ivan Moody and FFDP have long peddled finds their biggest approval from the daily-do workforce to those looking for an extra push in their reverse curls.

Love these guys or not, "Fake", "Top of the World" and "Rock Bottom" do benefit from steaming mad grooves, which "And Justice for None" is banking its entire tour per diem upon. The problem is, this album is also a grueling 15-song marathon where the flavors only change beyond vanilla now and then. The filler stuff like "Stuck in My Ways" and "Bad Seed" is conspicuous, and hopeless mimicry of SEVENDUST cues all over "Bloody" and "Trouble".

Which naturally leads to widespread accusations of FFDP suffering from acute NICKELBACK worship. Hate to say, the comparisons can be readily reserved for the breezy pop rocks of "Blue on Black", "When the Seasons Change", "Will the Sun Ever Rise" and the gluey ballad, "I Refuse". Don't these guys offer coasters and fridge magnets bearing "FCk Pop?" Let that thought simmer amidst these slow cookers.

While Ivan Moody demonstrates an appreciable set of clean chops on these down-tempo numbers (speaking of down tempo, check out FFDP's mulling cover of THE OFFSPRING's "Gone Away"),he brings his bark back full frontal on "Fire in the Hole". Consider the latter one of the album's heavier cuts, and one sure to prompt fan singalongs at the group's shows.

When a guy has to record his own take on Jimmy Kimmel's "Celebrity Mean Tweets" and throw a deadpan flash of silence in light of a gauche comment in the form of "Best of luck in recovery...smoke beer," it grossly shadows new material looking for promotion. "And Justice for None" is sure to sell plenty even in this drain hole of a market, but all anyone's talking about is the trials of a frontman who's still obviously in survival mode. This album will do little to take the heat off him.