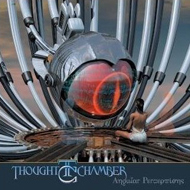 THOUGHT CHAMBER is the product of guitarist Michael Harris and vocalist Ted Leonard (ENCHANT). Along with Bobby Williamson (keyboards),Rob Stankiewicz (drums),and Derek Blakely (bass),the result of the collaboration is "Angular Perceptions", a progressive metal album with songwriting and groove as the central focus. InsideOut seems to pick the bands on its roster with the utmost care and "Angular Perceptions" will lead no one to think any differently.

Considering, Leonard's alluring work in ENCHANT, it will come as no surprise that his golden pipes shine brightly on "Angular Perceptions". His command of melody lines is second to none and it shows most evidently on the album's most catchy track, "Sacred Treasure". With overtones of KANSAS' classic material, the song soars on the chorus, ensuring that the melody will continue ricocheting off the insides walls of the cranium for hours afterward. "A Legends Avalon" possesses a similar melodic brilliance, the incorporation of acoustic guitar bits giving it a breezy feel as well.

Aside from the gentle ways of "Silent Shore", the songs move along at a brisk pace, and all of the tracks come in under eight minutes (several are between five and eight minutes). There is a good deal of virtuoso playing, but in no cases do the tracks come off as mere musical showcases for the musicians involved, even though you'll have plenty of opportunities to enjoy some impressive soloing. The instrumental tracks ("Premonition", "Mr. Qwinkle's Therapy", and "Accidentally On Purpose") are as enjoyable as the songs with lyrics. "Accidentally on Purpose" is the star of the bunch, thanks to a truly funky and groove-based performance. On "Mr. Qwinkle's Therapy" it is the fleet-fingered bass playing of Blakely that is guaranteed to catch your attention every single time.

More aggressive than ENCHANT and benefiting from Leonard's sterling vocals, "Angular Perceptions" has a lot going for it. THOUGHT CHAMBER deftly strikes the balance between accomplished musicianship and memorable songs. Search all you want for fatal flaws; you'll be lucky to find any.