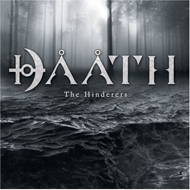 They brought in the big dogs for DAATH's debut album, "The Hinderers". A James Murphy production (co-produced by the band),engineering assistance from Andy Sneap, and a Colin Richardson mix gives the disc the kind of fat and chunky sound that's been heard on other Roadrunner releases from bands like DEVILDRIVER. Along with the ubiquitous Kevin Talley supplying the behemoth beats, the disc is anything but underground, kult, and lo-fi. If that were all it took, then "The Hinderers" would be an album for the ages. Well, it's not an album for the ages, more like one that will have mass commercial appeal for fans that are under the illusion that they're listening to a brutal death/black metal release. "The Hinderers" is instead a groove-based, modern metal release that does possess a death/black metal sound, at least to some extent, peppered with electronic effects and faintly industrial vibe. But musically, it's a mixed bag that sounds too modern for its own good, even if it does feature a healthy punch and several songs worth listening to more than once.

It is on tracks like "Subterfuge", "Sightless", "Above Lucium", and the fairly slammin' "From the Blind" that the feeling ones gets is something along the lines of "hey, this isn't too bad and actually kicks a little ass, but borders on generic." DEVILDRIVER at least takes that big production and does something that works better. If it sounds like I'm ripping "The Hinderers", I'm actually not. It's a more than tolerable album, but in no way a great one. A smattering of cool guitar licks, some solos, and the use of keyboards give several of the tunes a measure of worthiness. "Cosmic Forge" is a standout track for its memorable, keyboard-laced chorus and iniquitous feel. Things get a touch strange on "Dead on the Dance Floor" with techno-beats mixed with heavy riffs, and groovy rhythms; not bad a tune and one that at least deserves a degree of praise for being a little different from the rest.

So where does that leave "The Hinderers" in the larger scheme of things? It leaves it as a release that stays above mediocrity, but does not deserve the hype that it's gotten in some circles. The biggest problem is in trying to decide the kind of band that DAATH wants to be. It is the type of album that's got a handful of positives going for it and a slew of effective, for lack of a better term, parts, resulting in an album that those outside of diehard circles may want to check out. It is definitely missing that certain "something" though.