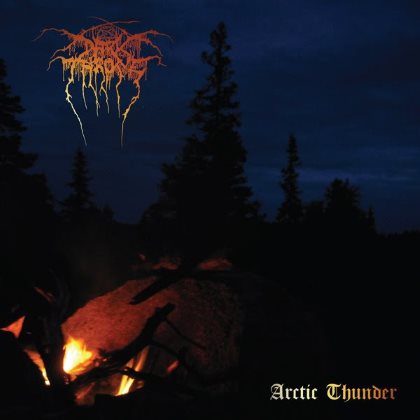 DARKTHRONE, the champions of the second wave of black metal, has been at it for nearly 30 years. Following its classic death metal debut, "Soulside Journey", the Norwegian band forged an ominous, hateful and cold sonic style that was truly scary at the time, by conventional standards, anyway. And it was much more than music. With Norwegian black metal, the lore is inextricably linked to the music. DARKTHRONE was a part of the well-documented movement that literally took the figurative war against Christianity to a fiery, blood-soaked level of criminal madness. The group was feared by ordinary people. The mystique has long since left the building, and that's obvious if you consider that, against his wishes, drummer Gylve"Fenriz"Nagell was recently elected to town council in the Oslo suburb where he resides.

But as people and times change, so do songs and sounds. It was a little over a decade ago when "The Cult is Alive" ushered in a punk-inspired era—in the way that MOTÖRHEAD was a hybrid of punk and metal. The album was divisive due to the stylistic shift and purist nature of black metal elitists. The band maintained that course until 2013 when it released "The Underground Resistance", which marked another pivotal moment. This time, DARKTHRONE fully embraced its adoration of first-pumping eighties style heavy metal glory.

The dynamic duo of Fenriz and Nocturne Culto, who handles all vocals this time, has returned, throwing another curve ball with 2016's "Arctic Thunder", studio album number 17, for those who are counting. "Arctic Thunder" is a primal pastiche of classic eras of death, thrash, doom and heavy metal. It's also the bands most obvious flirtation with the archetypal style of black metal they helped establish. Yet the duo isn't simply rehashing its back catalogue. The once mysterious pair perform with a feeling of authenticity that's true to the spirit of old-school Norwegian black metal. Deriving its name from an eighties Norwegian metal band, the release's namesake couldn't be any more apropos considering the ice-cold aura emanating from the frigid, depressive lurch of opener "Tundra Leech". This vibe continues all the way through to the oddly titled closer "The Wyoming Distance", which strangles listeners with a CELTIC FROST-bitten death thrash grip.

"Arctic Thunder" isn't a carbon copy of DARKTHRONE's utterly bleak and claustrophobic early period, which was itself a reconstruction of raw HELLHAMMER aesthetics. "Transylvanian Hunger" or "A Blaze in the Northern Sky" aren't simply ripped off. "Arctic Thunder" is a self-referential expression of the group's entire body of work, which also dances between death metal, stripped-down thrash metal and classic heavy metal. The title track, in fact, charges forth with a shameless, over-the-top dirge into classic heavy metal and BATHORY-style histrionics. "Arctic Thunder" offers more than enough material that should satiate stubborn black metal purists as well as fans of DARKTHRONE's more recent efforts.