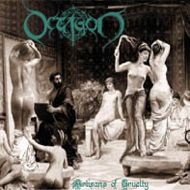 The vocals aren't any worse than what you've heard on countless old-school BM releases, but they are pretty weak and silly sounding at times. It's also kinda hard to take these harrowing tales of S&M, murder and molestation too seriously, given their general air of eighth-grade Goth poetry (to say nothing of the Jack Skellington tattoo on the singer's arm). It's a nice change from the usual pseudo-satanic heap of mystical bullshit, but should be taken with just as much of a grain of salt.

Those aforementioned bits of primitive arrangement and churning, sometimes disturbingly off-key melody make OCTAGON a cut above most subterranean "tr00 kvlt" black metal out there. It'll all be academic to 99.99% of the world, of course, and that's as it should be — this is for an elite (read: nerdy) few to pick apart and enjoy for its deliberately sickened, mud-and-blood vibe.