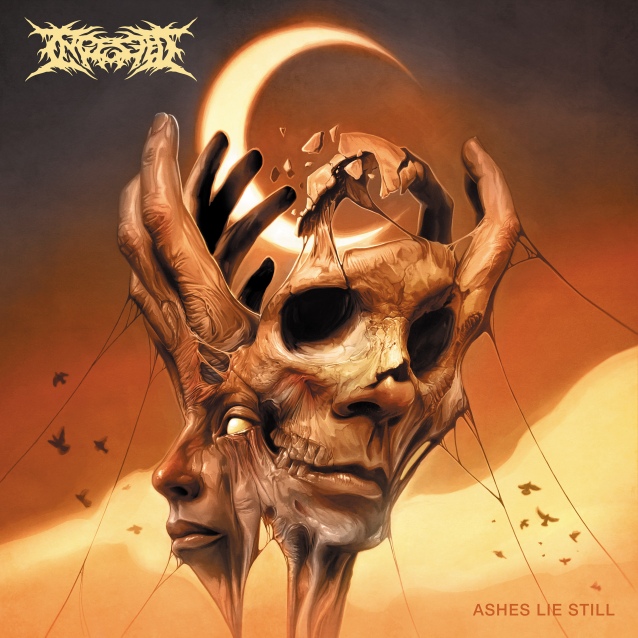 Firmly at the forefront of UK death metal since 2009's "Surpassing the Boundaries of Human Suffering" debut, INGESTED have still endured a long, hard slog to get the attention they deserve. In recent times, the band's sheer superiority over the competition has been impossible to miss. "The Level Above Human" (2018) and "Where Only Gods May Tread" (2020) both offered a punishing but sophisticated take on brutal, slam-centric death, with songs that had groove and dynamics to spare. At the time of writing, INGESTED are on a sold-out tour in the US with the all-conquering LORNA SHORE, and for those who have supported their endeavors from the start, their current rise is as satisfying as it gets. All they need now is an album to secure their position as leading lights in a crowded field, and — oh look, here it is!

The Brits' first album for METAL BLADE RECORDS, "Ashes Lie Still", exhibits not a shred of compromise or conformity. This is still a sustained blast of the murderous, machine-gun violence that INGESTED have peddled from the start, but their songwriting has taken at least two giant steps forward this time. The result is an album with palpable emotional depths, albeit one that also puts a great deal of effort into smashing everything to oblivion.

INGESTED hinted at a more sophisticated approach on recent anthems like "Invidious", "No Half Measures" and "Rebirth", and it comes into full bloom here. The opening title track encapsulates the band's growth: from grimly gothic intro to a taut labyrinth of blastbeats and cudgeling grooves, it is as hard-hitting as anything INGESTED have released, but volubly darker and more obviously crafted to hit heads and hearts. "Shadows in Time" is equally stunning. It is INGESTED in slow-mode, surfing on waves of muscular heft, it has sharp but skewed hooks and a spiritual link to the old school. Similarly, "Tides of Glass" harnesses more languid tempos and wallows in impenetrable, gothic black, with melodic leads spiraling up from the mayhem and a final riff that threatens to bring the ceiling down. There's a blackened edge to several songs here, not least the swarming, grandiose "Sea of Stone". Thanks to occasional, eerie electronics and surging synths, "Ashes Lie Still" is frequently as overblown as any symphonic death metal record in recent memory. INGESTED retain brutal death metal as a guiding spirit, but songs like "Echoes of Hate" and morbid, melodramatic finale "Scratch the Vein" are anything but generic. Instead, multiple strands of deathly artistry have been woven together here and executed with rare finesse.

Time to wake up and smell the brutality. One of the last decade's most innovative and unapologetically crushing bands have made their best album, scorched off towards a triumphant future and left what remains of the competition spluttering in the dust.