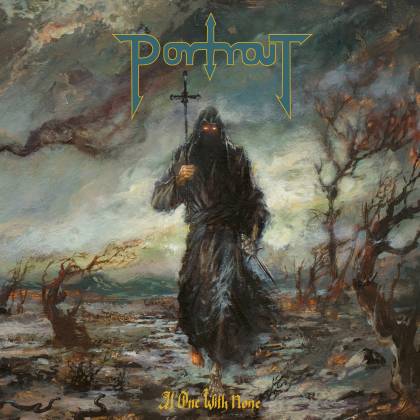 At One With None

A magical proposition from the start, PORTRAIT somehow tapped into heavy metal's unerringly atavistic principles without ever sounding like some self-consciously retro knockoff. Along with WOLF's "Evil Star" and a handful of others, the Swedes' self-titled 2008 debut album gave substance and sustenance to the welcome return of old-school clangor in the 21st century, with some much-needed mystique and malevolence thrown in as a bonus. Vocalist Per Lengstedt's KING DIAMOND-saluting shriek was simply the blood-spattered icing on the cake.

Thirteen years and three subsequent studio albums later, PORTRAIT are still one of the most resolutely unreconstructed heavy metal bands, but with a steadily increasing emphasis on the more progressive and adventurous side of their sound. No one would ever question that MERCYFUL FATE are the primary influence, both here and on every previous PORTRAIT record, but while some bands settle for accurate pastiche, this band took that cherished template and ran with it, building upon that one great idea with multiple 'Eureka!' moments of their own. The result is that "At One With None" showcases that evolution, and is PORTRAIT's most sophisticated and mature record as a result, albeit still with firm roots in the grubby grandeur of the early '80s.

Grand and unrelenting, the opening title track swiftly confirms that this is also PORTRAIT's heaviest and best-sounding album. The song itself is boldly and grimly theatrical but is also blessed with haunting melodies and spine-tingling dynamics. It's a powerhouse performance from the whole band, with Lengstedt's voice soaring with more depth and power than ever before, and those all-important shifts of tempo executed with murderous precision. "Curtains (The Dumb Supper)" offers a more direct approach, with shades of US power metal and lashings of glowering melodrama; "Phantom Fathomer" thunders into rumbling true doom territory, underpinned by an insistent shuffle and steeped in arcane devilry; "He Who Stands" is all fire, fury and supernatural speed metal spite.

But it's the grotesque majesty of nine-minute centerpiece "Ashen" that will have diehard PORTRAIT fans salivating uncontrollably. The Swedes have always had a penchant for a sprawling epic, with previous efforts like "The Adversary" (from the debut) and "Der Todesking" (from 2011's "Crimen Laesae Majestatis Divinae") standing tall among a formidable canon. "Ashen" upholds the tradition with a dash more melodic suss than before. Almost IRON MAIDEN-like in its slow-burn enormity, it's an epic heavy metal song for the ages.

A final triumvirate of the SATAN-esque "A Murder Of Crows", the skull-rattling "Shadowless" and wonderfully evil and evocative closer "The Gallow's Crossing" bring PORTRAIT's fifth full-length to a close: each one a thrilling demonstration of how timeless and life-affirming this music can be when it's safely in the hands of masters.