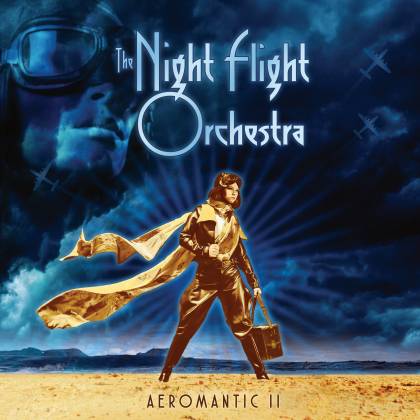 A supergroup formed by vocalist Bjorn "Speed" Strid and guitarist Daniel Andersson of SOILWORK and joined soon after by bassist Sharlee D'Angelo (MERCYFUL FATE, ARCH ENEMY) on paper has the makings of a devastating display of heavy metal forces joining together. Beginning with their 2012 debut record "Internal Affairs", THE NIGHT FLIGHT ORCHESTRA surprisingly soon became well-renowned for its catchy tributes to the power-pop, arena-rock, and movie soundtracks of the early 1980's. In 2021, their formula may no longer have the surprise factor of earlier efforts, but their sixth album, simply titled "Aeromantic II" in the wake of 2020's "Aeromantic", showcases a band that has well-honed the beats of their chosen sound for another serving of feel-good power-rock odes to nights in search of love and adventure.

The group re-establishes that sense of comfort food from the onset with "Violent Indigo". The song's opening guitar licks are reminiscent of the title card from a movie released in the 1980's by defunct production studios such as Touchstone Pictures. The track very quickly becomes another showcase for the arena-level choruses, catchy guitar hooks, drum fills and synth solos that prove to be the main drivers for the next 50 minutes. The influences that have driven the band up to this point are still omnipresent, perhaps even more so than ever on "Aeromantic II". The underlying keyboard work of "Change" plays like a super-charged version of the 1983 GENESIS hit, "That's All". D'Angelo's bass lines on "I Will Try" evoke the spirit of TEARS FOR FEARS' "Everybody Wants To Rule The World". Strid channels the best performances from the singers that topped the charts in '84, belting it out like RICK SPRINGFIELD, especially so on the album-closing "Reach Out".

The true beauty of THE NIGHT FLIGHT ORCHESTRA though is that for all of the moments that their '80s-influence pastiche could potentially cross over the line into irredeemable cheese, these are musicians that have well mastered the ability to both craft a great pop song and still undeniably make it rock. Drummer Jonas Källsbäck once again gives a stadium-worthy performance behind the kit. Andersson and fellow guitarist Sebastian Forslund long ago established their chemistry and ability to deliver axe work that merges the power of the shred with a pop sensibility, and new keyboardist John Lönnmayr very capably steps into the seat vacated by longtime stalwart Richard Larsson emerging very quickly as a valuable force. Lönnmayr shines with solos that are equally as flashy as those performing from the front of the stage, combing his talents with the guitar duo on standout moments for many of the album's tracks. Lönnmayr's keys stand alongside a catchy bit of funk-rock guitar to elevate the sense of triumph that powers "Midnight Marvelous", provide an even bigger boost of adrenaline to "How Long"'s already energetic chorus, and boost the dance-floor conga-rock of "You Belong To The Night".

It's a testament to the chemistry that THE NIGHT FLIGHT ORCHESTRA have developed — and the strong musicianship that backs that chemistry — that what on the surface initially came off as a fun diversion has not worn out its welcome a decade later. "Aeromantic II" is the sound of a band that hit the ground running in executing its vision and still has many miles left on its shoes years later.