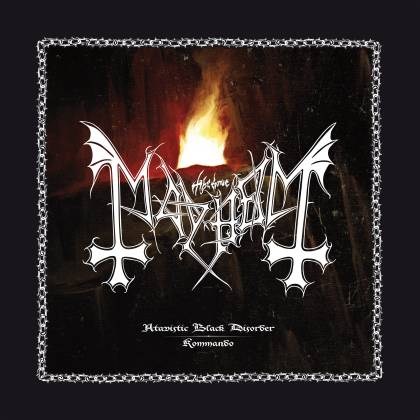 The legendary Norwegian black metal act MAYHEM was in the rhythm of its global touring schedule for their sixth full-length, "Daemon", when the ravaging pandemic struck and brought the entire earth to a standstill. Fortunately, because drummer Hellhammer recorded the songs for that album quicker than planned, the band had some extra studio time which led to extra tracks, including some hardcore punk covers. This material has been compiled into a solid new EP designed to satiate fans who are craving more from one of history's most notorious bands. "Atavistic Black Disorder / Kommando" highlights the less considered underground genre that lent itself to the foundation and spirit of MAYHEM: hardcore punk. And any way you cut it, the EP serves as an interesting release showcasing the band slightly outside of the unit's typically perceived parameters.

For a band that's been entrenched so deeply in chaos and volatility, it has actually had periods of noticeable lineup stability. The current lineup — including longtime members Hellhammer (drums),Necrobutcher (bass),Attila Csihar (vocals),as well as relatively newer guitarists Teloch and Ghul (formerly of CRADLE OF FILTH) — has been one of the ensemble's strongest and most enduring, running nearly a decade-long thus far, and prominently bookmarked initially by the dynamic 2014 full-length "Esoteric Warfare". The new EP includes a trio of non-album songs from the "Daemon" recording sessions: "Daemon" bonus tracks "Black Glass Communion" and "Everlasting Dying Flame", and the previously unreleased "Voces Ab Alta". The latter track is bold and majestic, but not at all void of the menacing snarl that's simply inextricable from MAYHEM's soul.

But the punk covers are truly the point of intrigue regarding "Atavistic Black Disorder / Kommando". "In Defense Of Our Future", featuring Messiah on vocals, is a solid DISCHARGE cover. Former vocalist Maniac does a decent Jello Biafra impersonation, with a comparable rapid vibrato, as he provides guest vocals on the DEAD KENNEDY song "Hellnation". "Only Death", a RUDIMENTARY PENI cover, is sterile for the most part; however, Attila's choice to offer his maniacal black metal styled moaning stands out favorably.

There is nothing mind-blowing about MAYHEM's new EP. It isn't necessarily essential listening for longtime fans, and if one is surprised or questions the authenticity of the band's early inclination toward punk, they might want to revisit 1987's "Deathcrush" EP. But "Atavistic Black Disorder / Kommando" is an interesting, enjoyable and revealing view of one of MAYHEM's rarely discussed early sources of inspiration.