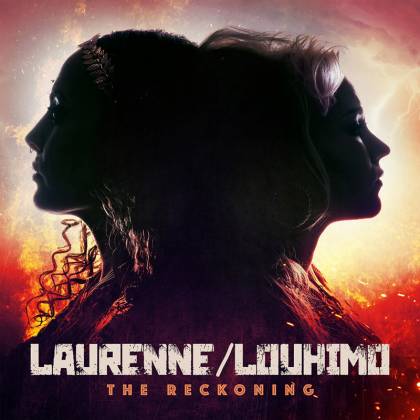 Dedicated students of melodic rock and AOR aside, it seems unlikely that many people will be familiar with FRONTIERS MUSIC's habit of putting bands and collaborations together. It's almost as if the label has abandoned the idea of waiting for great new bands to emerge and are just creating them from a giant list of stupidly gifted musicians and vocalists, which actually doesn't sound like a particularly bad idea, all things considered. And as odd as the approach might seem, it does keep leading to records like "The Reckoning", wherein two of the greatest female voices in modern metal collide, across some of the most thunderous and unapologetic heavy metal that Frontiers has released to date.

If you're not familiar with Noora Louhimo by now, you should be. Frontwoman with BATTLE BEAST, she is simply one of our greatest living heavy metal singers, and there are certainly moments on "The Reckoning" when she threatens to overpower her partner-in-bombast, SMACKDOWN's Netta Laurenne. Fortunately, the relationship between the two plainly extends beyond one trip to the studio, and their blended voices never sound anything less than natural, with Laurenne asserting herself with just as much bravado as her fellow Finn. At times, her smoother, more angelic delivery contrasts beautifully with Louhimo's arena-levelling roar, but both deliver some truly roof-lifting performances here.

These are great songs, too, which rather nullifies any cynicism one might have about the whole thing. "Time to Kill the Night", "The Reckoning" and "Tongue of Dirt" fly by: a blur of giant tunes, gleaming AOR bluster and old-school metal pomp. "Striking Like A Thunder" is half hazy power ballad, half pop-metal riff-up, with enough gleefully overwrought emoting to bring any house down.

This year's most demented, none-more-classic metal riot by some distance, "Bitch Fire" sounds like an outtake from "Painkiller" and could hardly be more perfect for Louhimo; the closest thing we have to a new Rob Halford at this moment in time, as her imperious vocals in the song's berserk chorus confirm. Likewise, Laurenne's voice steals the show on the hazy balladry of "Hurricane Love", as orchestras, choirs and platinum-plated kitchen sinks bounce gracefully off the walls. From the power metal stomp of "To the Wall" to the haunted melodrama of closing epic "Dancers of Truth", every song has a huge hook, a colossal sonic presence and buckets of charm. Most importantly, LAURENNE / LOUHIMO demonstrate a chemistry and a shared love for heavy metal heroics that plainly deserves to be revisited from time to time. This sounds like it was great fun to make, and it's even more rewarding to listen to. A pick 'n' mix approach to A&R has some major advantages, it seems.