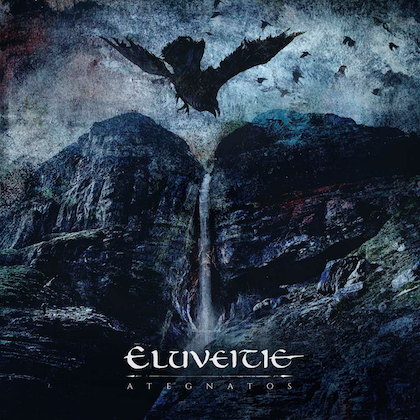 A decade ago, as folk metal enjoyed its somewhat expected commercial explosion in Europe, the genre tag swiftly became synonymous with a kind of semi-comedic party metal. Not that there is anything wrong with TURISAS, FINNTROLL or even the relentlessly daft KORPIKLAANI, but there was always more to the folk metal formula than its more cartoonish exponents alluded to. Firmly at the heart of the genre's creative maelstrom since 2002, ELUVEITIE have dared to dream of a more expansive and adventurous form of folk metal, and the Swiss band's steady rise to prominence suggests that a lot of people share in that artistic reverie.

It is almost certainly coincidental that CELLAR DARLING, three former members of ELUVEITIE, have themselves released a monumentally great album in 2019. "Ategnatos" is plainly not a response to that, but it says a lot about this band's inspirational qualities that we now have two bands from the same inspirational wellspring hitting peak form at the same time. On first listen, ELUVEITIE's eighth studio album is very obviously their most absorbing and rounded effort: the melodies leap from the speakers, the arrangements sparkle with imagination and vitality and, most importantly, the melodic death metal spine that has always set the band apart from their peers is more robust and unbending than ever. Both the opening title track and the fiddle-driven "Deathwalker" point to a sharpening of songwriting blades. In the latter, there's a confidence and looseness in the ensemble's delivery that is genuinely startling and not a little joyous. And it's that celebratory vibe that persists throughout these 60 vibrant minutes. With numerous riffs and grooves nodding pointedly back to the straight-ahead clatter of ELUVEITIE's first two albums, cynics might suggest that the band are simply delivering the goods with a bigger budget, but such has been the evolution of their overall sonic approach that even the most brutish moments on "Ategnatos" feel fuller, darker and more meticulously realized than before. "A Cry in the Wilderness" is a case in point. Erupting in full-on Gothenburg mode, it's a strident, melodic headbanger, but one with countless subtle embellishments that bring the whole thing vividly to life. At this point, ELUVEITIE have much more in common with AMORPHIS than anything more frivolous, and in the likes of "The Slumber" and "Breathe" they have self-evidently sidled into the progressive metal realm here too. Best of the lot are "Worship" and "Rebirth", two theatrical but murderous slices of otherworldly dark metal, replete with pitiless blast beats, orchestral flourishes—further proof that the accordion is a genuinely sinister instrument—and commanding performances from vocalists Chrigel Glanzmann and Fabienne Erni.

Production-wise, "Ategnatos" is big and bold but much more organic and live sounding than ELUVEITIE's most recent works. A demonstration of maturity rather than a leap into the unknown, this is full of everything that fans have come to love and expect from the band, but the folk metal tag is nowhere near broad enough to contain an album as intrinsically wide-eyed and widescreen as this.