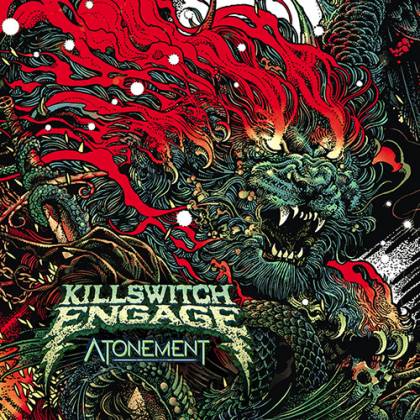 Being KILLSWITCH ENGAGE must feel like a thankless task at times. Back in 2002, when the Massachusetts metalcore mavens released "Alive or Just Breathing", they were quite rightly acknowledged as standard bearers for a resurgence in defiantly un-nu-metal. 17 years later, every time they release a new album, it feels like a huge deal. Perhaps partly because we are still waiting for a new band to take that blueprint and do something comparably exceptional with it. Right now, KILLSWITCH are still the benchmark for this stuff, and they can hardly be faulted for putting the effort in. Following the 2012 return of Jesse Leach, Adam Dutkiewicz and co. have seemed revitalized and refocused, with both 2013's spiky comeback "Disarm the Descent" and its heavier, superior 2016 follow-up "Incarnate" showcasing a band comfortable in its own skin but eager to push forward. If there has been a downside to this latest era in the band's story, it's a lack of songs to place alongside the likes of "My Last Serenade" and "Rose of Sharyn" as quintessential KILLSWITCH anthems.

That's not to say that the last two albums lacked passion, power or even great songs. It's just that as inarguable guardians of a very particular strain of modern metal, KILLSWITCH ENGAGE are long overdue another album of the caliber and enduring allure of "Alive Or Just Breathing" and "The End of Heartache"; records that defined a decade and that still define the band in most people's eyes and ears, whether they like it or not.

The good news is that there isn't any bad news. From the opening, low-slung grind of "Unleashed" onwards, "Atonement"immediately feels more like the exuberant KILLSWITCH ENGAGE of those early classics: there's an intensity to the riffing, a whip-crack swagger to the whole thing and a thrilling sense of urgency. And yes, it sounds like KILLSWITCH too, but somehow new and improved. Ironically, what the band have done here is what virtually everyone claims to do, but never actually does. "Atonement" is more melodic than its predecessors, with a handful of choruses that could well make grown men cry, but it's also noticeably, gloriously heavier than anything the band have recorded. The likes of "The Crownless King" and "Ravenous", while hardly bereft of melody, are authentically vicious by mainstream metal standards, and even something as pointedly anthemic as "I Can't Be the Only One" packs a bigger-than-expected punch.

Somehow the combination of melodic and brutal elements feels more gleeful, experimental and bold here than before: witness the blend of soaring vocals and scattershot blastbeats during "As Sure As the Sun Will Rise" or Jesse Leach's throat-shredding, punk rock bellow throughout the otherwise restrained and catchy "Know Your Enemy". This is the sound of a band messing with their own formula, safe in the knowledge that no one has effectively upgraded it in nearly 20 years. Even the catchier moments — the tear-stained "I Am Broken Too", the mid-paced and morbid "Take Control" — indicate a desire to subtly redefine the KILLSWITCH sound. It's also significant that this is by far the band's angriest album yet; a predictable reflection of the times, of course, but Jesse Leach has always worn his anti-authority colors and punk rock ethos with pride, so it's hugely satisfying to hear him channeling that into his words here, in particular, "Us Against the World" sounds custom-designed to rally the troops or, at the very least, inspire some deafening crowd participation.

An early burst of success can be both curse and blessing. "Atonement" is unlikely to be heralded as KILLSWITCH ENGAGE's masterpiece, but it is plainly their strongest album since Leach's return and a very timely reimagining of a sound that, like it or not, has helped to define a vast amount of metal in the 21st century. These are the best songs the band have written in 15 years, and there is fire in the KILLSWITCH belly again. Excellent times.