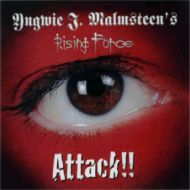 Neoclassical die-hard Yngwie Malmsteen may have several thousand chord combinations at his disposal, but it was inevitable he'd eventually hit a creative brick wall faster than one of his own arpeggios. There are only so many times you can trot out the same Vivaldi reference points and gloss them over with a few vaguely different harmonics. And indeed have such a frenzied revolving door personnel policy, you don't get to gel with your hired players before they're prematurely frog-marched away.

Where the cracks really started to show — if you were being kind — was on 2000's Alchemy album, Yngwie having re-enlisted vocalist Mark Boals (from the splendid Trilogy era) in an attempt to bring back the glory days and edge away from his hugely underrated melodic rock phase. Sadly, Boals performed like a distressed seal, Yngwie's self-production was clearly the work of a man with no ears, and the songs were largely — for want of a more subtle descriptive term — shit.

Bridging sensibly over the woeful War To End All Wars album, we have now arrived at Attack! — by name an album that should see Yngwie strongly re-affirming his position as the confident, arrogant, fleet-fingered axeman with a band behind him who ooze power and skill.

When you see the likes of five-minute RAINBOW shrieker Doogie White in the group credits, however, it doesn't exactly fill you with hope. That said, the band's collective efforts on the album's opening shot, "Razor Eater", manage to scythe into the jugular a treat — White's poised vocal, in particular, being led by a top-form Malmsteen chug. It's also a blessed relief at this point to hear an expansive production job that hasn't been squeezed as tight as if it were wearing the Swede's circulation-stopping leather strides.

As the whole affair pans out, it becomes evident that bringing back those days of old is still very much a concern. Songs pass in this riff-driven vein that are by varying degrees passable ("Valley Of Kings") and, well, not bad ("In The Name Of God"),but in reality — the aforementioned opener aside — nothing hits the flighty heights of Malmsteen's early or mid-period output.

And then the inevitable happens that finally consigns the whole shebang to the file marked "less than spectacular." If Doogie White's floundering efforts on the album's sole AOR-esque cut, "Touch The Sky", weren't flat enough, then Yngwie himself assuming the entire vocal mantle on "Freedom" and grumbling his way through the track is nothing less than excruciating.

With that unsettling image in mind, he may still be one of the best guitarists in the rock/metal genre, but without due care and attention his diminishing songwriting skills may well drag the overall Malmsteen experience down to a rather inglorious pub rock level. Shame.