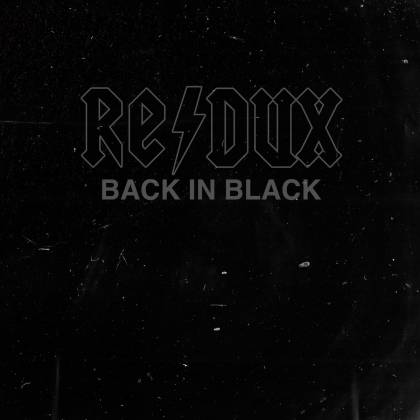 Back In Black (Redux) / The Best Of AC/DC

Back In Black (Redux)

The Best Of AC/DC

As someone wise once said: everybody loves AC/DC, don't they? In fact, not liking AC/DC is usually a sign of some deep-seated, twisted desire to spoil everybody else's fun. Regardless of where you elect to sit on the rock-to-metal spectrum, AC/DC are indelibly etched into the culture. Everybody loves AC/DC. That's a rock fact, and you are welcome to it.

Of course, tribute albums are a slightly trickier deal. For every heartfelt and worthwhile salute to a legendary band or album, there are many, many terrible tribute albums full of half-baked plods through cherished tunes. Fortunately, Magnetic Eye Records have excellent form when it comes to such things, and just like their all-star honoring of BLACK SABBATH, PINK FLOYD, HELMET and ALICE IN CHAINS, these multi-band celebrations of prime AC/DC hit the target hard and often. Ultimately, the love for the Australian legends is audible and infectious throughout both of these laudable endeavors.

If you love AC/DC — and you do — then you definitely love "Back In Black", and while nothing is ever going to top the globe-conquering perfection of that 1980 monolith, its songs remain wonderfully malleable and open to fresh interpretation. RED FANG deserve all the credit in the (under)world for their evil take on "Hells Bells", wherein some inspired tinkering with the original chords transforms the song from bluesy stomp to infernal eruption. It's AC/DC possessed by BLACK SABBATH and it will warm the soul of any true metalhead. Similarly, noise rock titans WHORES.' mutant demolition of "Have a Drink on Me" keeps the original's spirit intact, but drowns it in misery and icy dissonance. Elsewhere, HOWLING GIANT team up with UDO DIRKSCHNEIDER for a suitably fiery and classic-sounding "Shoot to Thrill", and SUPERSUCKERS remind everybody what rock 'n' roll is supposed to sound like via a snotty and speed-fueled version of "What Do You Do for Money". Another startling curveball is Swedish fuzz squad BESVÄRJELLSEN's slithering, doom-laden and deliciously overwrought take on "Back in Black" itself, while JAKETHEHAWK's lysergic reading of "You Shook Me All Night Long" is ingenious, mesmerizing and utterly mad.

"The Best Of AC/DC" simply delivers more of the glorious same, rummaging through the rest of its titular heroes' esteemed catalogue and letting a few more great bands let loose. SUPERSUCKERS are back with a straightforward but nicely crabby take on "Overdose", and Australian brutes WITCHSKULL's "Sin City" adds extra balls to a song that already had elephantiasis of the testicles. For more mind-expanding thrills, FU MANCHU's Bob Balch and MOS GENERATOR's ever-prolific Tony Reed cross the streams on a bruised and noirish "What's Next to the Moon"; Texan space-sludge mavericks GHOST SHIP RITUAL audibly lose their minds on a wildly drugged-out and perverse version of "The Razor's Edge"; ageless garage lurkers ELECTRIC FRANKENSTEIN play "High Voltage" with such urgency that it matches the original's exhilarating rush note-for-note. Best of all, Norwegian doom heroes DOMKRAFT destroy all-comers with a doped-out and destructive re-imagining of "Night Prowler". If AC/DC had swapped booze for hallucinogens and opiates, this slow-motion tsunami of creepiness would have been the result. It's an astonishing piece of music, cover version or otherwise.

Clearly curated and performed by people who genuinely adore and respect AC/DC, these two hails to the rock 'n' roll chiefs are hugely entertaining, admirably substantial and frequently extraordinary. That's how you pay tribute, folks.