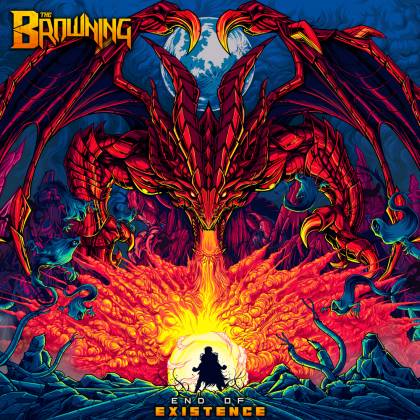 It may have been one gimmick too far for some, but THE BROWNING's combining of state-of-the-art deathcore with the stuttering electronics and glitchy spikiness of EDM was always a good idea. It just needed time to mature and mutate. "End Of Existence" is the Kansas City band's fifth album, and while the essence of their sound remains much the same as it was on 2011's "Burn This World", creative mastermind Jonny McBee has been audibly chipping away at his vision all along. Smarter, sharper and armed with much stronger songs than ever before, this might even surprise a few scowling cynics.

In contrast with previous albums, McBee has put this album together on his own, and perhaps that is why this feels so pin sharp and zoomed in compared even to 2018's "Geist". Still rooted in skull-rattling futurism, songs like the imperious opening title track and the cheerfully vicious "Destroyer" benefit from a more natural relationship between man and electronics. Where previous albums were often noticeably heavy-handed in their blending of robot beats and deathly riffing, new songs like "Rage" and "Torment" blur the lines between the programmable and the untamed; not so much evoking a dystopian future as summoning some long-overdue technological retribution in the here and now. Weirdly, that means that THE BROWNING sound more like a cohesive band than they ever have, despite this having been entirely created under the sharp lights of McBee's own studio.

Again, it is the songwriting that lifts this album several rungs above its four predecessors. "Gott Ist Tot" ("God is Dead") and "No Man Can Become A God" are particularly revelatory, as McBee finds new ways to rejig his band's core sonic ingredients, while delivering deeply satisfying melodic payoffs. In particular, "No Man…" is a mini-epic with a prog-like cinematic sweep. It is easily the most memorable song THE BROWNING have released to date. Almost as good is "Prophecy", a marauding groove metal assault with a synthwave soul. Meanwhile, closer "Fearless" cranks up the electronics to arena-filling fever pitch: a firm and final 'fuck you' to the naysayers.

As ever, if the idea of metal mixed with EDM gives you violent facial tics and a sense of impending doom, "End of Existence" makes no attempt to make amends or win you over. And nor should it. THE BROWNING have spent a decade pursuing an eccentric and polarizing path, and they still sound like a flash of inspiration brought to life.