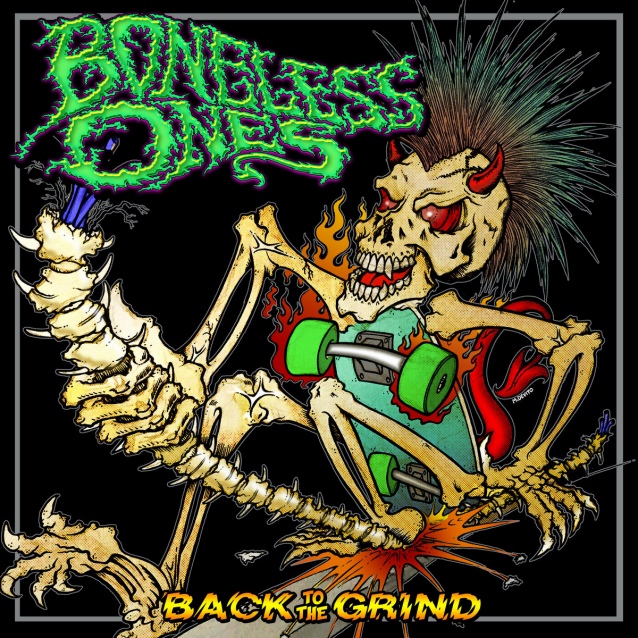 Back To The Grind

No matter how many new subgenres and futuristic mutations are thrown at us, there will never be a more righteously entertaining or invigorating phenomena in heavy music than crossover thrash. Diehards and obsessives may recall THE BONELESS ONES from four decades ago, when the Bay Area quartet released "Skate For The Devil": a spiky and irresistible album of chaotic, riff-heavy skate-punk that, in truth, sums up that era as well as any other. Of course, one of crossover thrash's most distinctive characteristics is that it never gets old, and so the reunion of these cult troublemakers in 2019 was only ever going to end in more killer music. 38 years after the release of its predecessor, "Back To The Grind" is all about the joy of music, culture and comradeship that never leaves you, but it's also a deafening reminder that these veterans — including founding members vocalist Max Fox and bassist Troy Takaki with drummer Chris Kontos (ex-MACHINE HEAD / ATTITUDE ADJUSTMENT),and new recruit, FORBIDDEN guitarist Craig Locicero — are still at the top of their game.

This is just an absurd amount of balls-out, goofy fun, just as an album about skating, beer and cartoon violence should be. THE BONELESS ONES had no real reason to evolve musically, but the decades have added pathos and power to their songwriting. As a result, every one of these songs hits the spot, from the POISON IDEA-style snot-rock of the opening title track, through to the speed metal madness of "In The Cold". There are highly effective detours into a more nuanced form of epic metal ("Church Of Violence"),and delirious singalongs that recall the best of '80s street punk, but with all the oomph of the modern underground ("Cops & Robbers", "I Wish You Were Beer"). Elsewhere, "Bones Of Rock" takes a hatchet to swaggering hard rock, "Blood On The Street" evokes the sinewy specter of BLACK FLAG over some riotous blues metal, "Tied To A Stake" rips and snarls with dark thrash abandon, and "Good Friends" sounds like a pristine outtake from (again) POISON IDEA's "Feel The Darkness" (but heavier).

We live in an age where nearly every band is routinely described as legendary, everything gets reissued eventually and, regrettably, nostalgia is king. But just for once, a trip back in time has proven to be worth the effort. A euphoric, jolting dose of the only crossover that really matters, "Back To The Grind" is timely, timeless and custom designed to soundtrack your next backflip off the furniture.