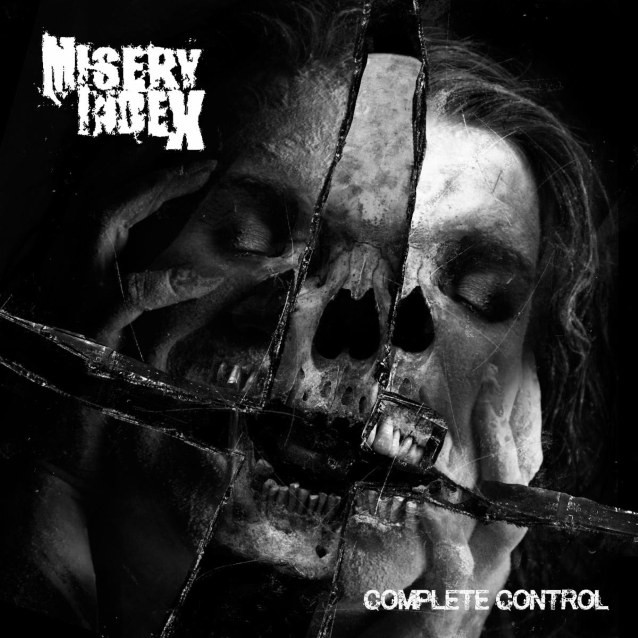 01. Administer the Dagger
02. The Eaters and the Eaten
03. Complete Control
04. Necessary Suffering
05. Rites of Cruelty
06. Conspiracy of None
07. Infiltrators
08. Reciprocal Repulsion
09. Now Defied!

With volatile sociopolitical circumstances consuming the global stage, there's no better time for a new MISERY INDEX album. Running two decades strong, the Baltimore-based band returns with "Complete Control", a nine-song juggernaut that's true to the band's violent death metal template and infused with grindcore and hardcore punk influences that are even more prominent and overt than they've been in many years. MISERY INDEX has always been an instantly recognizable act that has focused on quality songcraft, but this time around, the band's collective songwriting ability has improved immensely. "Complete Control", the unit's first full-length since 2019's "Rituals of Power", is quite possibly the best album of MISERY INDEX's career with explosive songs that are interesting and addictively catchy.

A part of the band's ongoing fortitude can be chalked up to its enduring lineup, as the band in its current form has existed for over a decade. Founding member Jason Netherton (lead vocals, bass) has been banging out the belligerent jams with Adam Jarvis (drums) and Mark Kloeppel (rhythm guitar, vocals) for more than 15 years, while Darrin Morris has played lead guitar with the quartet since he replaced John "Sparky" Voyles in 2010. Yet there was a sense they had reached a sturdy plateau on their last two releases, but there was nothing that we hadn't heard before. With "Complete Control", there's a greater sense of urgency as well as a rougher punk edge that contrasts the increased heavy metal element exhibited by the busy guitar solos on songs like "Now Defied!" and the title track, the latter of which is also replete with a heartfelt, anthemic chorus section.

MISERY INDEX has never focused upon death metal tropes of gore, the occult or Satanism. True to form, they continue to belch diatribes built upon thoughtful social commentary, fueled by Netherton who has a Ph.D. in Media Studies. (He also authored the book "Extremity Retained: Notes From The Death Metal Underground"). "Complete Control" touches upon the notion that people aren't subject to control in the modern world via violence; instead, people are dominated by a pervasive arm of social control and pressure that targets people on an individual level. Intuitively enough, this cerebral outlook manifests itself in a passionate delivery of the thematic content on songs like "The Eaters and the Eaten" and "Conspiracy of None", tracks that are just as infectiously memorable as they are meaningful.

In the face of the recent and current pandemic, the band traded electronic files remotely and tracked at various studios. This was a necessary evil that many musicians faced, and a situation that MISERY INDEX viewed as being less than ideal. However, they acknowledge that the different approach contributed to a more meticulous and refined songwriting process. Whatever toll they may have taken, listeners will clearly reap the rewards of an incredible extreme music album. "Complete Control" is arguably the best album of MISERY INDEX's career.