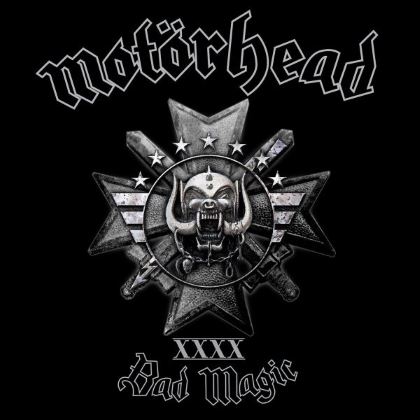 Lemmy, Mikkey and "Wizzo". They are MOTÖRHEAD, much as the band was Lemmy, "Philthy" and Clarke from the self-titled "Motorhead" through to "Iron Fist". The thing is, the current MOTÖRHEAD lineup has been together a hell of a long time—longer than many metal and hard rock bands. One thing you can guarantee, no matter who's been up to the plate in this treasured act, a MOTÖRHEAD album isn't going to suck. Sucking is simply not in Lemmy Kilmister's vocab. Argue all you want against "Another Perfect Day", it's still a gem and Robbo deserves an apology from the boo birds after all these years.

Here we are on the verge of what may be MOTÖRHEAD's swan song, both onstage and on record. If you've caught the band live over the years, savor the memories, just in case. It's no secret that Lemmy's deaf-forever road-dog mindset is finally catching up to him. Recent live cancellations and premature stoppages due to his current health shakes have MOTÖRHEAD fans worried sick. First and foremost, we should all care about the man's welfare. Even if he has made his peace, given the bombast and the random lyrical concession of Lemmy's own mortality on the band's latest album, "Bad Magic".

If we're to critique "Bad Magic" on the basis of Kilmister's possible forced retirement, then let us say that he, Mikkey Dee and Phil Campbell have plenty to give their audience. Even if it's mostly the same MOTÖRHEAD album they've been releasing year-in-and-year-out. As with 2013's red-hot "Aftershock", MOTÖRHEAD plays its best-laid cards with a few variations from their trusted hands. In less eloquent terms, it kicks mondo ass.

For the most part, "Bad Magic" cranks on all cylinders, hitting an obligatory thrasher with "Thunder & Lightning" and dropping a deafening quasi-ballad with "Till the End". Surrounding them are tireless poppers such as "Victory or Die", "Evil Eye""Teach Them How to Bleed", "Electricity", "Tell Me Who to Kill" and "The Devil".

Production is a mite slack in spots—to the point where Lemmy is drowned out—in other places, he exhibits the vocal wear and tear of a man whose long-beaten, gravelly pipes are betraying him due to a natural aging process. Lemmy is a freak of nature, and it's great to hear him ralph, croon and snarl with a give-a-damn will to live—you're a total piece of crap if you knock a guy who has given us his all for decades. He remains one of the most fearsome bassists on the planet; if his plugs on the grubby "Choking on Your Screams" aren't enough din for you: piss off!

"Bad Magic" may or may not be MOTÖRHEAD's final outing. Lemmy slogs not so much his atonement but acknowledgement of a maverick's life on "Thunder & Lightning", "Fire Storm Hotel" and "Till the End", prompting concerns about whether or not he's made his final peace with his rock ego. If MOTÖRHEAD keeps going beyond this point, it's because Lemmy, Phil and Mikkey simply haven't had enough. They know what they mean to heavy music, and "Bad Magic" is as solid as anything this band in any of its inceptions has churned out. Phil Campbell still lays down the greasiest solos in any genre, while Mikkey Dee remains a champion on the kit, hitting his fullest chops on the badass, tempo-mad "Shoot Out All of Your Lights".

Their meh cover of THE ROLLING STONES's "Sympathy for the Devil" notwithstanding, MOTÖRHEAD delivers a nasty, sometimes grimy, slab that should make fans smile. At this point, who the hell cares if MOTÖRHEAD puts out the same album? "Evil Eye" and "Teach Them How to Bleed" have been written countless times before, yet they continue to slay with a manic energy that can't be replicated by many bands half their age. MOTÖRHEAD has been given a pass for decades since there's no questioning their conviction. If you come to "Bad Magic" expecting anything less than ear-blasting, unstinting rock 'n' roll from the best piss rockers in the business, then take a damn hike: you never belonged here.