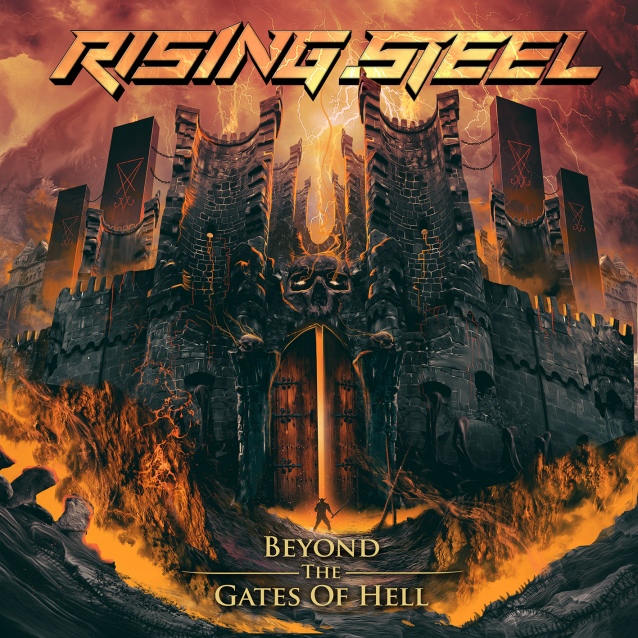 Beyond The Gates Of Hell

Best known as a reliable source of AOR and hard rock, FRONTIERS MUSIC have cautiously assembled a genuinely credible roster of heavy metal bands in recent times. Interestingly, the label seems to have a penchant for red-blooded, balls-to-the-wall heavy metal, rather than the shiny, upbeat power metal that you might expect from the home of JOURNEY and AUTOGRAPH. Either way, RISING STEEL were a welcome and instantly likeable addition to the Frontiers ranks when they released their excellent second album, "Fight Them All", two years ago. Like many bands, the Frenchmen have spent the last couple of years unable to tour, but "Beyond The Gates Of Hell" confirms that they used their time off wisely. Essentially more of the resolutely traditional but deceptively heavy same, the band's third album is another great showcase for all concerned.

Steeped in the stainless steel of JUDAS PRIEST, ACCEPT and VICIOUS RUMORS, but bolstered by several decades of speed, brutality and doom, RISING STEEL are the real deal. Vocalist Emmanuelson has strength, grit and character in plentiful supply: from the opening title track onwards, he is a compelling master of ceremonies, with resonant echoes of Messiah Marcolin's austere warble adding an extra layer of drama. On the likes of "Life Awaits" and the self-explanatorily nasty "Skullcrusher", his intensity as a performer is palpable.

RISING STEEL adhere to a classic metal blueprint, but they bend the rules frequently enough to ensure that every one of these songs hits the target. At their most theatrical on the grinding, four-to-the-floor horror show of "Death Of A Vampire", they deftly wring darkness and disquiet from the most prosaic of ingredients. They sound equally at home with more nuanced material — the aforementioned title track, the moody "Infinite Pain" — but "Beyond The Gates Of Hell" makes no bones about delivering a huge, bellicose dose of heavy metal purity. "Run For Your Life", "From Darkness" and yes, "Skullcrusher" are all perfect, fat-free, four-minute metal ragers with devastating hooks, blistering lead breaks and, again, flawless, powerhouse vocals from Emmanuelson.

When heavy metal is executed with power, passion and ferocity, the only reasonable response is to turn it up and bang your head. On this evidence, RISING STEEL deserve nothing less.