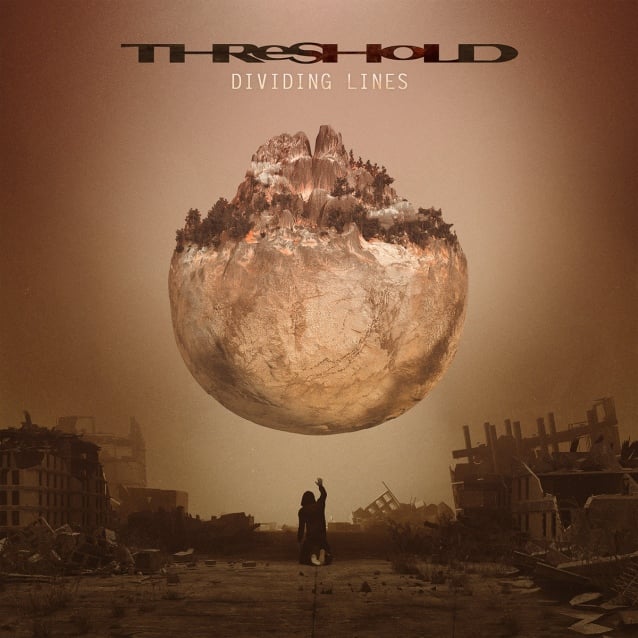 Discerning prog metal fans recognized THRESHOLD's last album as a watershed moment in their lengthy career. Reunited with former vocalist Glynn Morgan, the British veterans sounded newly enthused and inspired on 2018's "Legends of the Shires". A concept piece full of great songs and labyrinthine epics, it delved into the whys and wherefores of an increasingly divided world, with the UK's departure from the European Union as an unspoken but unmistakable backdrop.

Rather than return to the "…Shires" story for their 11th studio album (something that keyboardist Richard West will imminently pursue with his new band OBLIVION PROTOCOL) THRESHOLD have taken an even deeper dive into the world's woes. Although by no means bereft of light or hope, "Dividing Lines" is an album with a lot on its mind, and its songs are as dark and heavy as any in their creators' catalogue as a result.

No amount of darkness can disguise THRESHOLD's unerring knack for writing killer melodies, however. Punchy and insistent, "Haunted" is the perfect opener. As ever, this band are always a few degrees heavier than you remember them, and yet their grasp of ensemble dynamics still takes the breath away, as the brutish chug of Karl Groom's riffs makes way for a meandering, mellifluous and mesmerizing mid-section. When the chorus kicks back in, it is a concentrated rush of sugary goodness. Similarly, singles "Silenced" and "King of Nothing" dazzle with their catchiness and concision, while still finding room for bold virtuoso moments and off-piste indulgence. Another single, "Complex", ups the heaviness and the atmospheric tension, sharpening its blunt instrument bluster to a refined, lethal point.

As familiar as THRESHOLD's overall sound is after more than 30 years, this band still have the capacity to surprise and delight. "Let It Burn" is particularly startling inclusion. With its dark, dramatic undertow, fueled by the stuttering crunch of Groom's riffing, it waxes and wanes across seven minutes, becoming increasingly black and brooding along the way. A combination of acute melancholy and delirious, '80s prog synths make "Lost Along the Way" another obvious highlight, while the short, snappy "Run" is simply an immaculate modern metal song, with another chorus to kill for. It is the expected (or possibly even demanded) epics that complete the picture, and with the same sense of adventure that made "Legends of the Shires" such an artistic bull's-eye. Shrouded in the symphonic uproar of Richard West's layered keyboards, "The Domino Effect" is a sprawling, episodic thing, with at least two unforgettable choruses, a towering lead from Groom and a vocal from Morgan that is gritty, intimate and strangely moving.

The closing "Defence Condition" is even more audacious, as icy, Euro-pop synth hooks and abrasive electronics are woven through a gleaming skeleton of forcibly updated, traditional prog metal. As it slows to a grinding, malevolent halt, Morgan switches to an infernal growl as the world collapses in on itself and all hope is, metaphorically at least, lost to the void. But even though "Dividing Lines" ends in darkness, its creators' enduring brilliance is its defining quality. In fact, dark times seem to have done THRESHOLD the world of good.