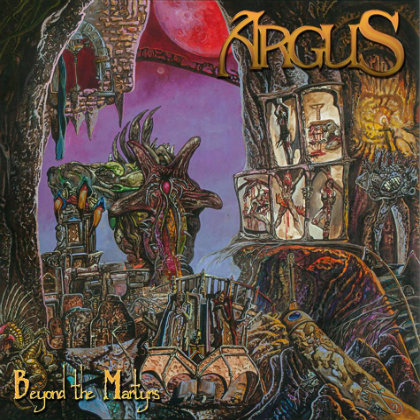 While you try to think deeply into the title of ARGUS' third album, "Beyond the Martyr", let's simplify things a little. The Pittsburgh trad metallers used the title in remembrance of their close friend and author, Bruce Nelson. "Beyond the Martyr" is from one of his works. From that point forward, dig for deeper meaning if you so desire, but the more important thing is the music, which demands enough attention itself.

The cyberpunk fantasy art executed by Brad Moore is in the vein of VOIVOD's Michel "Away" Langevin, and as you drink in the hyperactivity of giant locusts and larvae tearing down a purported microelectronic utopia, the members of ARGUS take a more conscientious and methodic pace to their songwriting.

Former PENANCE vocalist Brian "Butch" Balich is one the main catalysts to the success of this album that slides from one mid-tempo groove to another with dips into sluggish doom pastures. He has the capability to infuse occasional dramatics but overall, he simply assumes control over the fore of ARGUS' systematic power metal and doom attacks. One of his finest performances on the album comes on the smartly conceived "Four Candles Burning". Balich wails confidently over the lobbing bass knocks from Andy Ramage and twin guitar gusts by Jason Mucio and Erik Johnson. Balich thrusts himself through the steady yet busy bob of "Four Candles Burning" and the song is a vastly fulfilling venture.

While ARGUS is fortified by Mucio and Johnson's congruous guitar lines and frequently pretty solos (their intro lines to "By Endurance We Conquer" are sublime),one of the back-end stories is drummer Kevin Latchaw, whose cymbal rides throughout "Beyond the Martyr" are terrific, especially in the opening bars of "By Endurance We Conquer". The rapid clangs emitted by Latchaw out the gate on this album sets a high mark that's mostly met, even if the doom-spirited "The Coward's Path" could use tightening up on the verses prior to its galloping second half. To be frank, ARGUS is a better power metal act than doom.

Andy Ramage deserves a ton of credit for keeping ARGUS' instrumentation glued together. Even when "The Coward's Path"'s parts separate a bit too much in the doom section, Ramage acts as a buffer until the song speeds onward. Ramage rumbles and picks in the style of Steve Harris and you'll hear him taking charge in the back of "By Endurance We Conquer", "No Peace Beyond the Line", "Trinity" and "Cast Out All Raging Spirits". As much as Brian Balich, Jason Mucio and Erik Johnson will receive their proper accolades in this band, take away Andy Ramage and you have a grossly average sound. What ARGUS does isn't full-frontal; it's restrained and on its way to finessed. Ramage's bass is the fundamental element to keeping this band tight.

"Beyond the Martyr" is sometimes detailed but largely understated. In the end, it's a classy bit of old-fashioned heavy metal sitting on the cusp of exceptional. ARGUS should be pleased with themselves at this point. There's still room for improvement, but "Beyond the Martyr" is nevertheless a solid ride into Valhalla where their beloved chum Bruce Nelson is likely fist-pumping with appreciation.