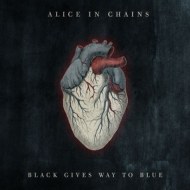 In all honesty, I was very skeptical about this album even being recorded in the first place. My disappointment in the self-titled release (though I'll admit it grew on me over the years) coupled with the tragic loss of one of rock's best voices in Layne Staley left somewhat of a bitter taste in my mouth where all things ALICE IN CHAINS were concerned. Besides, why would new material be of any interest when the likes of "Dirt" and "Jar Of Flies" have yet to grow stale? But, as they often do in the world of rock n' roll, things have a way of creeping back to life and soon the rumor mill was buzzing with talk of AIC's imminent return. Sparing you the history lesson of the reunion tour, I'll cut right to the part where the words "new material" were first uttered. Everyone knew by then that the new kid, William DuVall, was decent enough on the old tunes, but would he be able live up to legacy he inherited? Knowing that a large part of AIC's sound was created as a result of the near magical pairing of Staley's and Jerry Cantrell's voices, would DuVall have the stones (and soul) to step in and fill the void? In a word; yes,

Given the timelessness of "Dirt", it would be unfair to hold "Black Gives Way To Blue" in comparison, and I honestly feel like Cantrell and Co. realized any attempt to recreate said album would be pointless and probably fairly embarrassing. This is a new chapter in the book of ALICE IN CHAINS, but it's not one that's forgotten what came before. The urge to press forward, yet not abandon its own aura is evident right away with opener "All Secrets Known". With Cantrell's trademark riffing, textured with exotic subtleties and an impressive first impression of DuVall's ability to create a hauntingly memorable vocal line, the opening track sets the bar fairly high for the rest of the album. As close to classic ALICE IN CHAINS as we get on this one, "Check My Brain" and "A Looking In View" deliver those big, bottom-heavy riffs Cantrell is so well known for, along with even bigger choruses. At times during these songs, along with the soulful "Your Decision", I almost forgot that it was DuVall and not Staley I was listening to. Not that DuVall is cloning his predecessor or singing into a karaoke machine, but he is the perfect yen to Cantrell's yang.

On the darker side of this moon we have the melancholic "Private Hell" and the acoustic "When The Sun Rose Again", which would have been right at home on "Jar Of Flies" with its bluesy soloing and backing hand drums. "Acid Bubble", the album's most powerful and depressing track, is also arguably its best. Chilling melodies from both the guitars and vocals transcend AIC's normal gloomy brilliance and reach a new plateau of self-doubt and confusion before a straightforward and heavy-handed groove brings out an aggression seldom heard from this band. If "All Secrets Known" and "Check My Brain" are there to reintroduce us to ALICE IN CHAINS, then "Acid Bubble" is here to show us where they're going. Ending with a heartfelt eulogy to the late Staley, the tear-jerking title track is a beautiful way to end an already incredibly good album and features a surprise contribution from Elton John on the piano.

I'll be the first to admit that I went into "Black Gives Way To Blue" expecting a solid, yet ultimately unachieved attempt at recreating a former glory. What I encountered was much, much different. "Black Gives Way To Blue" is an honest look inside what ALICE IN CHAINS is today. Reminiscent of previous albums, yet delivered with a newfound level of clarity and humanity that only comes from putting everything the past where it belongs, this could mark the beginning of a new era of stellar music from the band that broke through the grunge barrier and redefined modern rock. Though it still leaves a little to be desired, this is an album well worthy of praise. Welcome back.