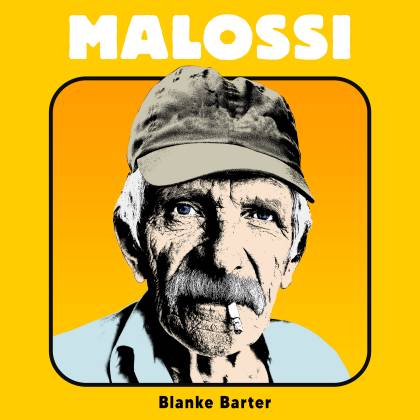 For reasons that become abundantly clear during "Blanke Barter", MALOSSI appear to be occasionally regarded as Norway's very own answer to CLUTCH. It's a comparison that would be ruinous for most, but this band's take on rootsy stoner rock and fuzzed-up grooves is more than sharp enough to withstand it. In fact, while MALOSSI rarely sound that close to CLUTCH at all, the songs on their first full-length album fizz with the same exuberance and unpretentious passion that seem always to have fueled NEIL FALLON and his comrades.

In every other respect, "Blanke Barter" is an idiotically entertaining hard rock record with bags of character and an infectious sense of genre-blurring mischief. MALOSSI sing in Norwegian, too: perhaps not such a mesmerizing novelty to their fellow countrymen, but an undeniable point of interest for everybody else.

Instantly recognizable as the kind of band everybody likes to listen to while drinking cold beer in the sunshine, MALOSSI kick off with the strident, blues harp-augmented fuzz-rock of "Far Hass Knut", emanating sun-scorched vibes and a slight stench of burnt rubber, before "Kje Med Are" meanders down woozy psych-doom alleyways, stopping off for an anthemic chorus with incisive vocal harmonies. "Kløpp Dreieventiln" brings the muscle-funk boogie, with echoes of long forgotten Roadrunner signings DIRTY AMERICANS, while "Kaffekjæft" rumbles and squalls like KYUSS in their prime. Never laboring a single idea or mining the same seam twice, MALOSSI sound as masterful on the laconic strut of "Tusen Mål Jord" as they do on the floored-accelerator scuzz of "Flatnævan", and while production values and particularly sumptuous guitar tone ensure that the whole thing hangs together well, the Norwegians' versatility and ability to switch gears remains this album's chief selling point. That point is hammered home on eccentric closer "Drømmer På Boks", which does weird and wonderful things with a handful of chords and some sweet blues metal licks, once again bolstered by killer vocal harmonies and more honking harmonica. If not the Norwegian CLUTCH, then close enough. "Blanke Barter" rocks, pure and furious.