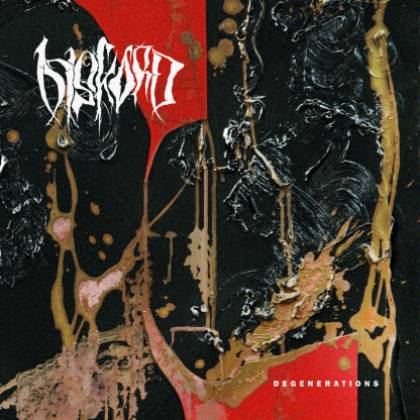 Death metal has multiplied and evolved with ferocious force over the decades, and it continues to spew up new and determinedly brain-mangling strains. DISKORD have been an intermittent force for death metal weirdness for over 20 years, but their recorded output has never exhibited the slightest inclination toward escaping the underground. As a result, the Norwegians' third album sounds perfectly untouched by outside influence. This band know their old-school and occult death metal inside out, but their approach is so warped and wilfully whacked out that it could only be the most natural thing in the world for these guys to play. Opener "Loitering in the Portal" is simply unhinged, with a giant, vicious kick-off riff that listeners will definitely not be expecting, and more detours per square inch than even the average GORGUTS aficionado will be able to fathom at first hearing. The Canadians are a good reference here, however, because the spirit of their "Obscura" watershed is much in evidence here, amid the myriad tempo changes and mood shifts of "Bionic Tomb Eternal" and "Dirigiste Radio".

Even more so, fans of DEMILICH will recognise the structural anarchy and mischievous sense of subversion that informs every riff and jarring rhythmic curveball here. But while those bands are obvious peers and forebears to DISKORD's madness, "Degenerations" exists in its own deranged universe, too. There is an angularity to many of the riffs, a weirdly compelling fluidity to the awkward, anti-grooves, and a strangely satisfying internal logic driving the neck-wrenching tangential leaps. Rather than dazzling us with their virtuoso chops and knowledge of jazz chords, DISKORD sound lost in a shared reverie of profoundly wonky noise worship. Here, the sluggish industrial squall of interlude "Lone Survivor" makes as much sense as the obtuse VOIVOD-isms and bulldozer avant-prog pummel of "Raging Berzerker in the Universe Rigid", and it all fits together as one sustained and hypnotic riot of wrongness.

To clinch the deal, DISKORD save their most twisted outburst until last. "Beyond the Grime" is a magical thing, in the worst possible way: with blastbeats, hazy goth arpeggios, hissing sludge and a tangible sense of worlds colliding and skulls caving in, it sounds a lot closer to the end of the world than most like-minded attempts. But what a way to go, crazed, creative and crushing to the last.