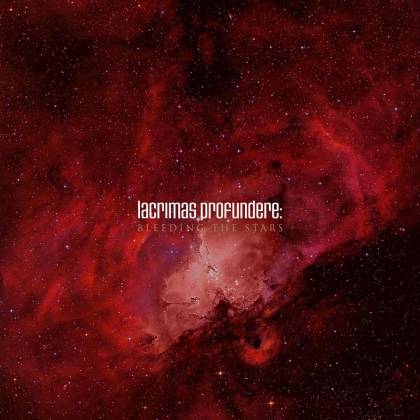 1. I Knew and Will Forever Know
2. Celestite Woman
3. The Kingdom Solicitude
4. Mother of Doom
5. Father of Fate
6. Like Screams in Empty Halls
7. The Reaper
8. After All Those Infinities
9. A Sip of Multiverse
10. A Sleeping Throne

Persistence is invaluable when it comes to pursuing your creative instincts. Proving the point, LACRIMAS PROFUNDERE have been making dark, melancholy music since the mid-'90s, first as purveyors of classically enhanced doom, but latterly as Germany's undisputed masters of extra-morbid but fervently melodic gothic (hard) rock. The band's transition from underground metal mavens to something approaching a mainstream rock phenomenon has happened seemingly by accident, and with such seamless fluidity that no one record has ever lifted the band to the level their increasingly mature and absorbing music deserves. All of that should have changed when LACRIMAS PROFUNDERE released 2016's "Hope Is Here": a flat-out masterpiece of morose introspection and soaring tunes, it consolidated everything the Germans had attempted in the past into one endlessly fascinating, slow-motion thrill-ride, replete with a gently expressed but mile-wide progressive streak. The kind of record you find yourself eulogizing about to complete strangers, it really should have been a huge hit. Maybe the world just wasn't in the mood to face more darkness. Who knows? Either way, the arrival of "Bleeding the Stars" seems to confirm that LACRIMAS PROFUNDERE share my bewilderment. Rather than retreat into the cozy, dark corners of their sound, they have sharpened everything up on their 12th album, trimming away a lot of the extraneous textures that made "Hope Is Here" such a deep journey and zooming in on the simplicity and emotional essence of the songs themselves. The result is a very different record from its predecessor, but one that shines the brightest light yet on this band's remarkable ability to make sorrow soar.

Opening track, "I Know and Will Forever Know", is an object lesson in fat-free intensity. This is doom-paced and dark-hearted, but the finesse behind the interwoven melodies, harmony vocals and bold, bombastic crescendos is plain to hear. With screamed and melodic vocals blending in the eye of the storm, it's a wildly evocative initial statement, far heavier than anything the band have done in a long time, and a subtly subversive way to kick off an album that is, in every other way, their most accessible yet. "Celestite Woman" is far more representative of where LACRIMAS PROFUNDERE are these days: you can hear the specters of SENTENCED, SISTERS OF MERCY and even HIM floating around in the mix. But founder and guitarist Oliver Nikolas Schmid has a distinctive style of his own, finely honed across the decades and very obviously in the rudest of health in 2019, underpinned by his band's often dizzying wall of sound. A rampaging, four-to-the-floor anthem, "Celestite Woman" is immediately offset by the widescreen canter of "The Kingdom Solicitude"; a beautifully grim shuffle through bleakness and dismay, its chorus erupts with real heavy metal power, conjuring mental images of icy, cloudless night skies and the infinite insignificance of human existence. A soundtrack to your next house party, this almost certainly isn't. But there is great joy and abandon in some of these elegantly crafted songs, even if the lyrics and overall mood are avowedly immersed in gloom. When they hit a higher tempo, as on the fiery "Father of Fate", LACRIMAS PROFUNDERE sound like they're tapping into the bullish myopia of youth, firing off brutish metal songs at will, scowling all the way. When they delve into more adventurous or dynamic material, like the haunting moonwalk of "Like Screams in Empty Hall", the succinctness and focus are still there, but made more vivid through deft imaginative touches. Most importantly, choruses and melodies are uniformly incisive, from the ominous alt-rock scree of "The Reaper" to closer "A Sleeping Throne"'s trail of KATATONIA-tinged tears. Frankly, feeling utterly crestfallen has never seemed such a potentially satisfying pursuit.

Although it would be slightly generous to say that "Bleeding The Stars" is a better record than "Hope Is Here", it does feel like this dogged band's most powerful and relatable piece of work to date. Each one of these ten songs will tug at your heartstrings, while you sit back and admire the sound of miserable masters at work.