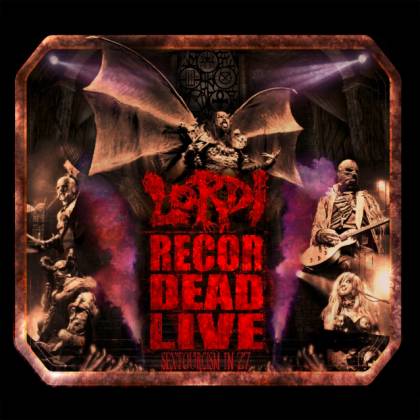 For metalheads of a certain age, LORDI will forever be inexorably linked to their victory in the 2006 Eurovision Song Contest. Proof that metal fans can be mobilized easily enough if you present them with a fun opportunity, the Finns' fan-voted moment of glory certainly enabled them to surf on a wave of notoriety for a few years. After all, what's not to like about a band that sound like a cross between "Constrictor"-era ALICE COOPER, STARSHIP and '80s JUDAS PRIEST and an image that looks like someone remade "Battlefield Earth" with an actual budget? From KISS to SLIPKNOT to pretty much any band that have grabbed a visual gimmick and run with it, the kind of theatrical insanity that LORDI have long propagated will always resonate with people to some degree, even if it makes a lot more sense to see the band in the flesh than to pay close attention to their recorded work. And that, of course, is where "Recordead Live – Sextourcism In Z7" comes in. The album's 90 minutes of nonstop cartoon brutality, with more singalong anthems than even diehard fans might have expected. This is LORDI's first real opportunity to capture the celebratory spirit of their shows: and, perhaps, to silence anyone that thinks the joke has long since run thin. On this evidence, it definitely hasn't.

Arriving hot on the heels of last year's enjoyably squalid "Sexorcism" album, "Recordead Live..." at least seems to showcase a band at the height of their powers. A cynic might argue that LORDI have long since had their moment in the sun, and that endless club tours of Northern Europe are as much as they can expect from here on in. If you've actually seen the band in recent times, you will know that there is plenty of life in Mr. Lordi's veteran dog yet. Given that the band first formed in 1992, you could forgive the imperious frontman for being thoroughly sick of sweating his balls off in the name of entertainment by this point, but from the opening "Sexorcism" onwards, he's clearly having almost as much fun as the raucous, baying crowd that lap up every excruciating, malevolent pun.

The biggest surprise for non-diehards will be exactly how many fantastic songs LORDI have written over the years. Material from the latest album crackles with a different kind of energy in this context, with "Your Tongue's Got the Cat" and "Naked in My Cellar" standing out as particularly brilliant/ridiculous. But it's older tunes like "Devil Is a Loser" (from 2002 debut "Get Heavy") and "Blood Red Sandman" (from 2004's "The Monsterican Dream") that most aggressively support the notion that LORDI's catalogue is probably more worthy of revisiting than previously imagined. "Recordead Live..." earns a shitload of extra points for genuinely sounding like a warts 'n' all live show, clarity and bite in perfect balance and plenty of ambient crowd noise to place you at the heart of the action.

Concluding with the inevitable Eurovision throwback of "Hard Rock Hallelujah", this is a glowing advert for one of the most unashamedly entertaining metal bands of the 21st century. Yes, it's all very silly. But it also rocks like an absolute bastard.