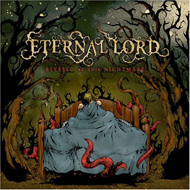 Blessed be this Nightmare

Down-tuned, 'core-laced deathcore seems to be all the rage these past couple of years and has picked up steam more recently. Bands like THE ACACIA STRAIN had been doing it for a while and new acts like SUICIDE SILENCE have continued down that road. To be perfectly blunt, it doesn't usually work all that well, with some exceptions (WHITECHAPEL being one of them, although theirs is a more pure strain of extreme music). I'd love to say that England's ETERNAL LORD is one of those exceptions (well, maybe not "love", but it would nice),but I cannot. It's not for lack of trying though as this Ferret debut has its moments and is not a stinker. It just doesn't leave me with much more than a ho hum feeling about it.

When the band goes for a straight, down-tuned pummel without mixing in disparate elements the result falls somewhere above middling. Heaviness abounds, yet the distinction is lacking. I'm not real nuts about the production either; it's more mud than thunder. Unfortunately, when the band expands its sound by offering slivers of black metal (it's pretty faint),classy solos that work fairly well, the occasional quiet part, and metalcore-based tunefulness, things aren't much better. The boys should have dispensed with the song-closing gang shouts on "O' Brothel Where Art Though" during the final mix too. "I, The Deceiver" moves into very tuneful territory, at least in this context, but ends up little better than an average melodic 'core-like tune with a ridiculously deep bottom end. Here again, it's not garbage, but it's not moving either.

As noted above, the act seems more comfortable with no-bullshit stompers like the tempo-varied "The Damned", even if one wouldn't call it groundbreaking. Finally, instrumental pieces and/or interludes are all well and good, but for as pretty as "Amity" sounds, it is wholly out of place on "Blessed be this Nightmare". A few cool "parts", a couple of decent ragers, and several of so-so tunes make "Blessed be this Nightmare" a big bowl of mediocre.