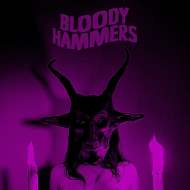 OK, so what need we tell you about BLOOD CEREMONY that you can't deduce already based on the most fundamental clues like their album cover, band name and song titles?

Yes, this crew from Charlotte, North Carolina crew is peddling the ol' occult proto-metal thing, clearly spurred on by the usual late '60s and early '70s influences, plus the more recent examples set by new millennium purveyors such as WITCHCRAFT (chiefly in the vocals),BLOOD CEREMONY and the DEVIL'S BLOOD, but, of course, with their own personal twist.

Furthermore, BLOODY HAMMERS approaches the entire retro aesthetic with a distinctly minimalist, less is more philosophy, as evidenced by songs like "Witch of Endor" and "The Last Legion of Sorrow", which only cautiously introduce discreet embellishments to their Spartan structures - the latter being typically built around hypnotically repetitive guitar riffs, or, in the case of somber ballads, resigned to eternal damnation, such as "Say Goodbye to the Sun" and "The Witching Hour", morbid melodic figures.

None of which is a bad thing, since it's precisely this restrained, uncomplicated songwriting strategy that makes these tunes and their many infectious hooks so easy to absorb (and whether that's an intentional or accidental '60s garage rock buzz we sense beneath BLOODY HAMMERS' proto-metallicisms is hard to tell, but it's sure tempting to tie it all back to 13TH FLOOR ELEVATORS legend ROCKY ERICKSON, given his connections to their shocen band moniker).

To wit, the stowaway synthesizer line underpinning "Fear no Evil" is so subliminal some listeners may not even catch it on a first pass, and, in fact, energetic, in-your-face numbers like "Black Magic" (which grooves with latent psychedelia reminiscent of UNCLE ACID AND THE DEADBEATS),are generally the exception here, not the rule.

Speaking of exceptions, there's a major one in "Trisect": a disappointing, mutant grunge number built on a de-tuned riff and baritone vocals suggesting ALICE IN CHAINS may be hidden in BLOODY HAMMERS' closets (much as they are in suspicious Texan acoustic occultists, ANCIENT VVISDOM),but then, there are far worse sins that that under the Morning Star.

Another weak offering, "Beyond the Door", further compromises the album's second half, but things start looking up again with "Souls on Fire" (think THE SWORD jamming with DEAD MEADOW),and then finish on an interesting, if slightly confusing note, via the gothic (don't laugh now),TYPE O NEGATIVE-ish "Don't Breathe a Word".

In sum: these confusing influences outside the proto-metal canon and overall bounteous comparisons to so many other bands suggests that BLOODY HAMMERS need to work a little more on developing their own identity; but from a less analytical viewpoint, there's much to like about this debut in terms of pure, engaging entertainment targeted point blank at the occult rock fan base.